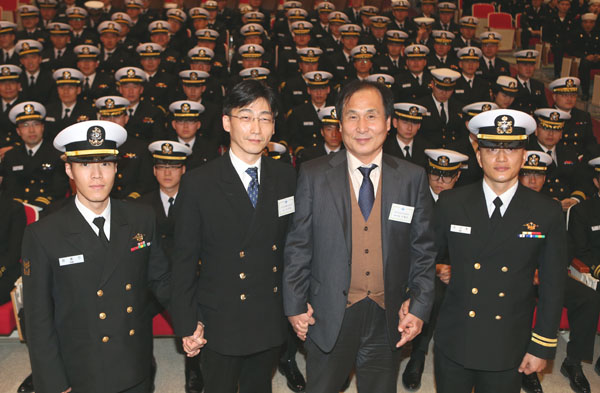 Seok Hae-gyun, second from right, captain of the hijacked Samho Jewelry, stands with two naval commandos yesterday who participated in the rescue mission during the two-year anniversary ceremony of Operation Dawn of Gulf of Aden at the Busan Naval Operations Base. Second from left is Doctor Lee Guk-jong, who treated Seok’s gunshot wounds. [YONHAP]


In commemoration of the two-year anniversary of Operation Dawn of Gulf of Aden, the Navy held a ceremonial event yesterday at the Busan Naval Operations Base, inviting members of the Navy’s elite Cheonghae Unit as well as crew members saved by the Navy commandos.

The military rescue mission in 2011 recaptured the 11,500-ton chemical cargo ship Samho Jewelry hijacked by Somali pirates in the Arabian Sea, rescuing all 21 crew members, killing eight pirates and capturing five, who are now imprisoned in the country.

Seok Hae-gyun, captain of the freighter who was shot during the rescue attempt, gave a speech during the ceremony. Seok now works as a special lecturer on national security at the Naval Education and Training Command.

About 70 members of the elite UDT (Underwater Demolition Team) members who took part in the special mission and former Chief of Naval Operations Kim Sung-chan, who is now a member of the ruling Saenuri Party, were among the attendees.

Since its establishment in 2009, the Cheonghae Unit has rescued 25 vessels threatened by pirates over 17 occasions in the Arabian Sea, according to the Navy.

“We are tasked with protecting the lives of Korean citizens in danger and will carry out our mission wherever and whenever possible,” said Captain Kim Jong-il, director of the naval public information office.