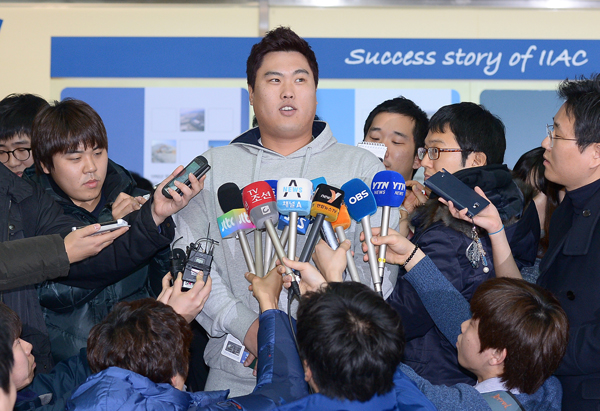 Ryu Hyun-jin speaks to the media yesterday before boarding a flight to Los Angeles at the Incheon International Airport. [NEWSIS]

The 25-year-old southpaw left for Los Angeles yesterday, launching a Major League career with the Dodgers after signing a six-year, $35 million contract, the richest ever for a player from Korea. Ryu has said that he won’t return unless he surpasses former Hanwha Eagles teammate Park Chan-ho, the winningest Asian pitcher in Major League Baseball.

“When I went to the U.S. to sign the contract, it was to get results,” Ryu told a press conference yesterday at Incheon International Airport. Ryu reached the deal in Los Angeles on Dec. 9 after a month of negotiations.

“But now I am in a position to produce the result, so that makes me nervous,” he said. “What matters now is how quickly I can take the pressure off my chest. If I try to adjust, doing as I usually do in Korea, it will be fine, I guess.”

Local media predict Ryu, who went 98-52 in his seven Korea Baseball Organization seasons, will be third or fourth in a Dodger rotation that includes Zack Greinke, Clayton Kershaw and Josh Beckett.

Ryu knows his performance in training camp will determine whether that prediction becomes a reality. “I will not overstretch myself from the beginning, but will work into shape gradually as I did in Korea,” he said.

Ryu will kick off his official schedule as a Dodger with a fan-meeting tour this weekend. He said he will work out on his own before reporting to camp on Feb. 13.

Ryu will likely get some tips from legendary Hall of Fame lefty Sandy Koufax. The Dodgers announced Tuesday that Koufax, who led the Dodgers to four World Series titles through 1965, will be a special adviser.

“I’m looking forward to spending time with the team during Spring Training and to contributing in any way I can,” Koufax said.

“The Dodgers are thrilled to have Sandy back with the organization,” said president and CEO Stan Kasten. “Sandy’s experience and perspective will be invaluable as we endeavor to do everything in our power to bring the city of Los Angeles a World Series champion.”