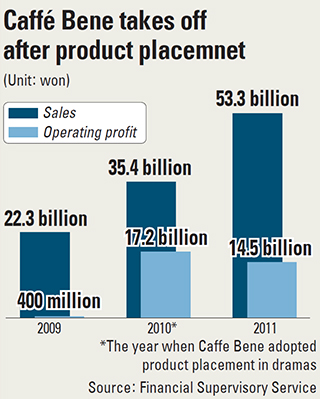 Lee Yu-jin, an avid drama fan, sits down in front of the TV every Saturday and Sunday night to tune in for one of the hottest new shows of the season, “Cheongdam-dong Alice.” She is disappointed, though, at the somewhat stilted and unnatural integration of certain advertisements in the story. Cellphones, brand-name pastries and glasses are just some of the many products shown off to unsuspecting viewers of the drama.

“There is simply too much advertising in the episodes,” says Lee, a high school student in her senior year.

Lee is one of many indignant viewers who are frustrated by excessive advertising in popular shows. Product placement, a marketing strategy in which a product is placed within a TV show for natural exposure, was legalized in January 2010, and it has since become common to see brand names on television.

Celebrities now openly advertise brands while in character. Before the change in law, the most disclosure any trademark could have was a product with tape over its name. 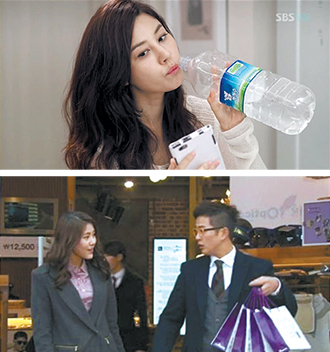 Top left: Seo Yi-soo, played by Kim Ha-neul, checks out her new smartphone in one hand while holding a branded bottle of water in the other during a scene of “A Gentleman’s Dignity.”

And “Cheongdam-dong Alice” is not the only drama filled with marketing. “The King 2 Hearts” introduced Dunkin Donuts as the main character’s favorite snack and even went so far as to make the donuts a significant part of the love story. Many important scenes in “A Gentleman’s Dignity” were shot in Mango Six, a juice bar and cafe where many of the main characters work.

Many corporations these days are increasingly embracing product placement as their main marketing tool to create a new source of revenue and brand recognition.

“The effects are extraordinary,” says Lim Kyung-rok, head of public relations at Look Optical, a local glasses manufacturer that promotes its products in “Cheongdam-dong Alice.”

“Two of the nine pairs of glasses worn by Park Si-hoo, the main character of the drama, have sold out. We have received floods of calls asking to open franchises.”

Thanks to the success of product placement in “Cheongdam-dong Alice,” the company is looking into other television endorsement opportunities.

One of the most successful product placement cases is Caffe Bene, a coffee chain. Though it had a rocky start in 2008, with the adoption of product placement and celebrity endorsements, it surpassed Starbucks in number of stores in Korea and has been the largest coffee franchise in the country since 2011.

Caffe Bene has served as a meeting place for characters in many popular TV shows and seems to have benefited considerably from the exposure.

“We’re not sure how much of an impact it had on sales revenue, but we do know for a fact that product placement has increased the name value of Caffe Bene,” says Hong Joo-hoe of the company’s promotional team.

Critics argue, however, that product placement has become too blatant and unnatural. They have even asserted that some endorsements violate existing regulations.

Though it is forbidden to mention the name of a brand directly on air, certain products are being used as literary devices to develop relationships between main characters. Lines that explicitly advertise brands can worm their way into scripts, according to critics.

Proponents of product placement, though, reject the accusations.

“The [advertising] contracts state when and how the products must be exposed,” says Park Sang-joo, section head of the Drama Productions Organization. “It is natural and important to meld advertisements as ingenuously as possible into a story, especially since profits coming from product placement make up half of a production budget.”

Since it is rare for local broadcasters to independently produce TV shows, production companies must find ways to make ends meet and often turn to soliciting financial support from major corporations through product placement.

But as such advertising grows more prevalent, so do the viewers frustrated by the place of brand names in their favorite shows.

Kim, for instance, complains that the blatant advertising not only distracts her from the actual story but also makes her feel like she is watching an hour-long commercial. Similar criticism can be found on many online communities for drama fans.

Critics also say that the laws governing product placement are vague and irregularly enforced. Only two inspectors are currently assigned to oversee the advertising, and new channels are not subject to oversight at all.

One regulation limits product placement to less than 5 percent of a show’s running time, but it is difficult for regulators to precisely determine advertising time. The law also does not state whether the rule applies to just one product or to product placement as a whole.

“Illegal product placement is not only against the law but is also a breach of the rights of viewers, who are exposed unwittingly to advertisements,” says a representative of the monitoring team at the Media Rights Center. “More specific laws and regulations might be the start of solutions that may solve the current issues and end in mutual satisfaction for both viewers and corporations.”

The government regulator also appealed to viewers for their help in policing the product placement system.

“It would make the laws even more effective if viewers took interest in monitoring television programs for any product placement that is too out of line,” says Kim Hyeong-sung, a section head in charge of regulations at the Korea Communications Standards Commission.