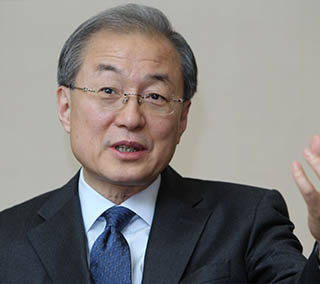 Trade Minister Bark Tae-ho emphasized the importance of the World Trade Organization at the first presentation of candidates for the top post of the world’s single largest trade body last week.

“The WTO can contribute to achieving all concepts of development through greater trade opportunities, capacity building and predictable rules,” Bark told the WTO General Council in Geneva on Thursday, local time.

A total of nine candidates outlined their ideas of what they would do as the next director general of the WTO at the presentation, including Herminio Blanco Mendoza, a former Mexican minister, and Indonesia’s former Trade Minister Mari Pangestu. Current WTO Director General Pascal Lamy is set to step down in August when his second four-year term ends. His successor will be picked by May.

In his presentation, Bark said “development is the core pillar of all of the negotiations that are being led by the WTO.

“Development means, first, raising standards of living, as set out in the preamble to the WTO Agreement,” he said. “Development must improve the welfare of all people, not just particular sectors or industry groups.”

For some countries, development could mean “joining and moving up in the global value chain,” “stabilizing their financial systems,” or “lifting themselves out of poverty,” he said.

He also claimed the need for aid in trade to help address supply side constrains of developing countries. To do that, he pledged to strengthen the WTO’s ties with development agencies as well as multilateral and regional development banks.

“Aid for trade can be promoted through close cooperation between the WTO and other international financial institutions like the World Bank,” he said.

The Korean trade technocrat said that if he is elected he will try to promote mutual trust among member countries in order to move ahead the stalled Doha trade talks.

“I would like to put forward a fundamental message, which is the need to rebuild trust. Whenever we face difficulties, I believe that problem-solving must start from going back to the basics,” Bark said.

“Once we have worked hard towards generating this critical level of trust - and you can be assured with the highest confidence of my role as an honest broker - there will come the moment when we will be able to move together toward a final agreement of the Doha Development Agenda negotiations,” he said.

The Doha Development Round, as it is also known, of trade talks started in the Qatari capital in 2001 to free up world trade by opening up markets and cutting tariffs and subsidies in rich countries. However, the talks collapsed in 2008 as member countries failed to agree on issues such as agricultural subsidies and industrial tariffs.

The 61-year-old technocrat helped forge the Korea-U.S. free trade agreement, which was implemented on March 15 after six years of wrangling and opposition from liberal politicians and the public.