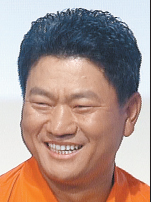 The award, named for the first secretary of the GWAA, is given to a professional golfer for contributions to the betterment of society.

“Although I feel that I haven’t done that much, I am honored to be recognized for my actions,” Choi, who will be honored at a dinner in Augusta, Georgia, the week of the Masters, said in a statement.

“This is the first award of any sort that I have received during my 13-year career on the PGA Tour and I feel that much more honored to be receiving an award for my charitable actions rather than my play.”

The 42-year-old golfer founded the K.J. Choi Foundation in 2007 with the mission of helping Korean children and communities, but his reach has extended to global aid for hurricane and tsunami victims.

When Choi, who in 2000 became the first Korean player to play full-time on the PGA Tour, won his first event - the 2005 Chrysler Classic of Greensboro - he presented a $90,000 check to a Korean Presbyterian church in town.

Choi donated $90,000 to hurricane victims in the United States in 2009 and, after his 2011 win at the Players Championship, he donated $200,000 to victims of the tornadoes that ravaged the southeastern part of the United States.