Kakao says NHN’s Line is nothing but a copycat

Kakao says NHN’s Line is nothing but a copycat 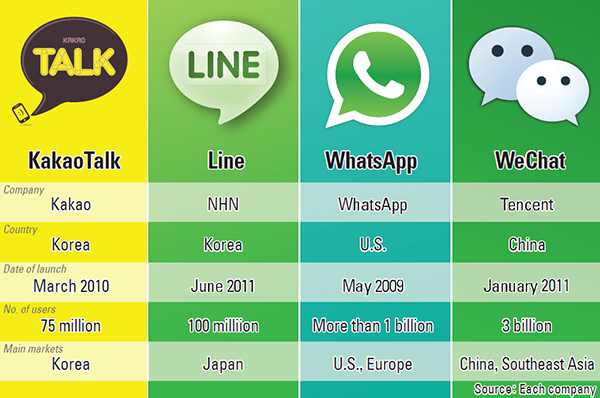 There’s tension in the lift lobby of a building in Pangyo Techno Valley in Sampyeong-dong, Sungnam, Gyeonggi.

The sixth floor of the building is occupied by Kakao, the operator of the mobile messenger Kakao Talk.

Executives from both Kakao and NHN come in and out - and the two companies are fierce competitors in the field of mobile messaging services. NHN runs the Line messenger service.

Kakao Talk, which has mushroomed since its launch in 2010, started generating profits from the second half of last year with its solid user base.

Its revenue-generating businesses include selling emoticons and Plus Friend, accounts for corporations or celebrities to engage the public.

It now has similar services called Sticker and Official Accounts.

Kakao Talk’s hit game Anipang has a competitor called Linepop on Line. Linepop had 12 million downloads in the first 10 days after it was launched.

Kakao is venting its fury over the copycatting.

“When we create a business model through a process of trial and error, NHN just copies the whole thing,” said a Kakao official.

“We understand that NHN could benchmark a successful business model but we think it’s unfair for NHN to copy the exact business model since we are a startup whereas NHN is a company with a lot of manpower and money,” he added.

In response, NHN claimed that such businesses as emoticons were in messenger services for ages.

Kakao Talk and Line, which are in both the Korean and Japanese markets, are trying to expand.

Line is going to Taiwan and Thailand.

Kakao, which introduced Kakao Japan in cooperation with Yahoo! Japan, is reportedly preparing to break into another country it won’t disclose. It’s keeping the plan secret so NHN won’t beat it to the market, Kakao says.

Facebook in the U.S. and Gree in Japan are watching every move of Kakao Talk and Line.

“At Facebook headquarters, there is a team dedicated to monitoring Kakao Talk,” said Kim Bum-soo, Kakao’s chairman, at a lecture at a university last week.

Kim is also one of the co-founders of rival NHN.

The world’s two largest mobile messengers are WhatsApp from the U.S. and China’s WeChat.

The number of messages transmitted in WhatsApp is now 10 billion a day. It is the No.1 mobile messenger app in the U.S. and Europe.

However, as there is no apparent profit model for WhatsApp. At the end of last year, rumors said it would be acquired by Facebook.

China’s Tencent, which is in 30 countries with WeChat, saw its number of users surpass 300 million in just two years since its launch.

Tencent is also the second largest shareholder of Kakao. It invested 72 billion won ($65 million) in Kakao last July, even before Kakao became profitable.

Stimulated by the success of Kakao Talk games, Tencent is preparing to provide its own games with WeChat.

Japanese and Taiwanese IT companies are also developing mobile messengers.

Some industry analysts point out that in order for Kakao Talk and Line to survive the global competition, cooperation with handset manufacturers is desperately needed.

WhatsApp is in cooperation with Nokia.

In Korea, Samsung Electronics, which aims to sell 300 million smartphones this year, is introducing smartphones equipped with ChatOn, its own mobile messenger app.