Wrestling squeezed out of the Olympics

Wrestling squeezed out of the Olympics

This Aug. 5, 2012 file photo shows Cuba’s Gustavo Balart, in red, competing with Korea’s Choi Gyu-jin during a 55 kilogram Greco-Roman wrestling competition at the 2012 Summer Olympics in London. IOC leaders have dropped wrestling for the 2020 Games in a surprise decision to scrap one of the oldest sports on the Olympic program. [AP/NEWSIS]


The International Olympic Committee’s decision to drop wrestling as an Olympic sport shocked Korea, a wrestling power, though it came with the good news that taekwondo will be kept.

The IOC executive board voted yesterday that the traditional Korean martial art will remain one of the 25 core summer sports. Wrestling was not so lucky, despite the fact that it was one of the first Olympic sports when the modern Olympics started in 1896.

But wrestling’s fate has yet to be sealed. The IOC’s executive board will meet in Saint Petersburg, Russia, in May to discuss which sport will be newly included in the 2020 Olympics. The pool includes wrestling.

It will be up against sports like baseball, softball, karate, squash, roller sports, sport climbing, wakeboarding, and wushu, but it is highly unlikely that a sport voted out so recently will be reinstated so soon. The final decision will be announced at the IOC session in Buenos Aires in September.

“While the process is not complete, the global taekwondo family should be proud of what we’ve accomplished over the past four years and encouraged that we are continuing to move in the right direction with our sport,” Choue said in a statement.

Meanwhile, the Korea Wrestling Federation is in shock. The organization declined an immediate comment on the IOC decision, saying that it would await a response from the International Federation of Associated Wrestling Styles, the world’s governing body of the sport.

“It just came out of nowhere, so we have little to say,” said a federation official. “The International Federation of Associated Wrestling Styles will hold a meeting in Bangkok on Saturday, and two Koreans will attend.

“We will be only able to form our stance on this after that meeting. We will keep in step with the decision there,” the official said.

The world’s governing wrestling body, also known by its French name, FILA, issued a statement on Tuesday, expressing its “astonishment.”

“FILA will take all necessary measures to convince the IOC .?.?. of the aberration of such a decision against one of the founding sports of the ancient and modern Olympic Games,” the international wrestling federation said.

According to The Associated Press, wrestling, field hockey and modern pentathlon competed in the final knockout round, with eight out of 14 IOC members voting against wrestling and three each against the other two sports. Taekwondo and canoe kayaking survived the previous rounds, The AP reported.

Wrestling has long been a medal mine for Korea. Since Jang Chang-sun won silver in the freestyle 52-kilogram event at the 1964 Tokyo Olympics, Korea has won 35 medals in wrestling. That’s the second most in any sport for the country, only trailing judo, which has given Korea 40 medals.

Korea’s first-ever Olympic gold medal also came from wrestling. It was earned by Yang Jung-mo in the 62-kilogram freestyle at the 1976 Montreal Olympics.

During the 2012 London Olympics, Kim Hyun-woo brought home the country’s first gold medal in eight years in wrestling, winning the 66-kilogram Greco-Roman event. The Korea Wrestling Federation was planning to come up with a plan to rejuvenate the sport. Choi Sung-yul, the head of a domestic electronics company, was elected as the federation’s new president last month on a platform of strengthening Korea’s status as a wrestling powerhouse. 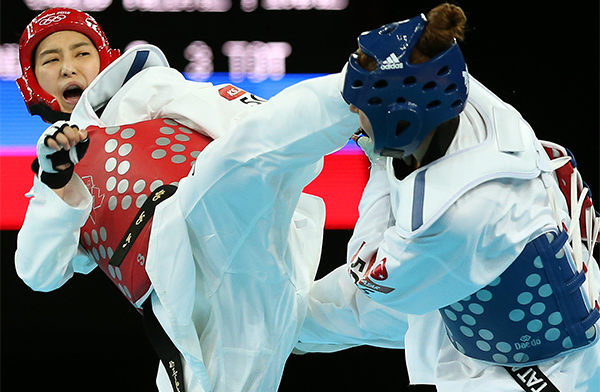 Korean Hwang Kyung-seon, left, beats Turkey’s Nur Tatar in the women’s welterweight division to win gold at the London Games on Aug. 11, 2012. The IOC has decided to keep taekwondo as an Olympic sport.[JoongAng Ilbo]


Taekwondo was first adopted as an Olympic sport ahead of the 2000 Sydney Olympics and has stayed for four straight Games. Korea has won 11 gold medals in the event.

The WTF estimates around 80 million people in 204 countries practice taekwondo.

However, for reasons such as dominance by one country and a lack of dynamism and fairness in judging, taekwondo was initially considered for being voted out.

But the governing bodies of the sport have strived to change perceptions with a set of rule changes such as the adoption of electronic body protectors and diversification of attack points at the 2012 London Olympics.

“Together, we ensured an incredibly successful London 2012 Olympic Games, but there is still so much more that we can do,” Choue said.

“Starting today, we must strive to make Rio 2016 an even greater milestone for taekwondo. This will not be an easy task, but we have already proven that we can achieve great things when we work together.”