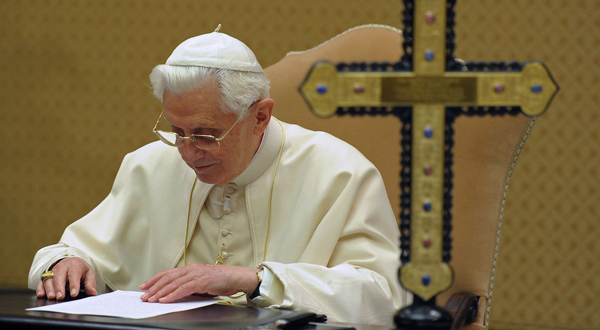 Nothing distinguished the papacy of Pope Benedict XVI so much as the way in which he is leaving.

We should be grateful that he realizes his body is failing him - most people in power do not - and is abdicating. But let’s not forget that it was Benedict who stood mostly mute as the sexual abuse of children by priests continued.

Benedict had a chance to be a great pope in one way and one way only: by recognizing the evil and dealing with it even when it meant punishing powerful prelates. He did not.

He had an opportunity to do so when he was appointed in 1981 to lead the Congregation for the Doctrine of the Faith, which was charged with dealing with the cascading number of sexual abuse cases. That appointment was odd given that when he was archbishop of Munich, Benedict - then known as Cardinal Joseph Ratzinger - had approved the transfer of priest and child molester Peter Hullermann. Even as he learned of the hundreds of Hullermanns and became the most knowledgeable high-ranking church official on the subject, Ratzinger chose to protect priests, bishops and cardinals at the cost of ignoring legions of abused children.

He was rewarded for his service by being elected to the papacy in 2005. Considering that he was elected by the very cardinals he was protecting, this development was hardly surprising.

Still, it’s never too late to do the right thing. As pope, Ratzinger could have been Paul on the road to Damascus, rectifying the incalculable harm done to thousands of innocent children by removing the culpable priests, bishops and cardinals from power. Instead, Pope Benedict’s almost eight-year tenure was marked by coverups coming to light in Ireland, Australia, the U.S. and Germany. He directed most of his energies to keeping women and gay men out of the priesthood and reprimanding nuns who were paying insufficient attention to his pronouncements.

Under his leadership, the church continued to deny its perfidy. As late as 2009, the Vatican pushed the line that it wasn’t priests who were responsible for the sexual abuse of children - it was gay men. In an official response to the United Nations Human Rights Council, Archbishop Silvano Tomasi said that 80 percent to 90 percent of abusive priests were not pedophiles but part of a “sexual orientation minority” of homosexuals attracted to adolescent boys. For good measure, he also complained that Protestants and Jews, baby sitters and family members were worse than priests.

Why pick on the Catholic clergy? This was consistent with the pope’s insistence that the church would investigate itself behind closed doors. The “standards of conduct appropriate to civil society,” he wrote in 1990, when he led the Congregation for the Doctrine of the Faith, “cannot be purely and simply applied to the church.”

Meanwhile, as the pope ignored the mission of the church to comfort the afflicted even if it means afflicting the comfortable, the wheels of secular justice continued to grind. This month, authorities caught up with Cardinal Roger Mahony, the former archbishop of Los Angeles. Thousands of pages of personnel files released by court order revealed how Mahony chose to reassign the abusers rather than protect parishioners.

Because part of the motivation to tamp down the scandal was financial - claims to pay victims would cost the church more than $650 million - Mahony had to get inventive. To pay off claims, he tapped $115 million from a cemetery maintenance fund. Those poor souls weren’t going to complain.

With Benedict’s resignation comes another chance for the church to change direction. When that puff of white smoke comes up from the Vatican chimney, it could herald the election of a cardinal from the developing world. Maybe he will remember what it’s like to be powerless and identify with the children who trusted the priests, instead of with his fellow cardinals who covered up for them.

Still, it’s hard to be optimistic that the church will right itself. Mahony was stripped of some of his duties after his disgraceful complicity in the sexual abuse scandal. But he has not lost his most solemn privilege: He will be joining the conclave to vote on the next pope. “I look forward to traveling to Rome soon to help thank Pope Benedict XVI for his gifted service to the Church,” he said in a statement.

At least Mahony won’t be joined by one of his fellow cardinals. It is church policy, not human decency, that will prevent Bernard Law, the former archbishop of Boston, ground zero of the abuse scandal, from taking part in the selection of Benedict’s successor. For papal elections, the age of disenfranchisement is 80. Law is 81, praise the Lord.