Choo shoots for his old job in center field

Choo shoots for his old job in center field 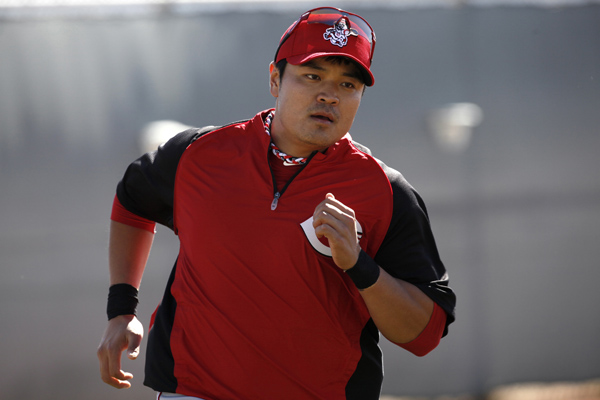 
GOODYEAR, Arizona - Choo Shin-soo has made 10 starts in center field over eight seasons in the majors. He’ll get a chance to win the job again during his first spring training with the Cincinnati Reds.

If that doesn’t work out, the defending NL Central champions will have to do some rearranging.

The Reds traded incumbent center fielder Drew Stubbs to Cleveland for Choo in the offseason, looking for a stronger bat at the top of the lineup. They haven’t had a consistent leadoff hitter for years.

They’re also going to try him in center at the outset. If he struggles during spring training, manager Dusty Baker could move Jay Bruce to center and let Choo play right field.

The Korean was a center fielder when he broke into the major leagues with the Seattle Mariners in 2005, but he was traded to the Indians in 2006 and was eventually moved to a corner outfield spot. Now, he’s trying to re-learn the position.

“Choo will be a kind of trade-off,’’ Baker said. ‘’If you can play center field here in Arizona, you can play it anywhere. I will try not to judge too harshly. First of all, the outfields are bigger out here. They have to be because of the thin air. There are no clouds. It is tough to judge talent here sometimes.’’

After a few weeks, Baker will decide how to configure the outfield. Choo knows he’s got things to learn about playing center.

‘’I’ve talked to Jay Bruce, [Chris] Heisey and the coaches,’’ Choo said. ‘’I’ve worked in center field, and I’ll do the best I can. After that, the middle of spring training or the end, Dusty will make a decision.’’

There’s no question about his place in the batting order.

Baker has had to use several players, including second baseman Brandon Phillips, in the leadoff spot because he didn’t have anyone who had done it successfully over time. Choo hit 16 home runs last season, and the Reds hope his left-handed bat will lead to higher power numbers with the short right field at Great American Ball Park.

Choo reached base at a .373 pace last season. Cincinnati’s leadoff hitters were worst in the NL at getting on base. With Choo batting first, the other hitters can get into more suitable spots in the order.

“The one guy you’ll see take off is Brandon Phillips, who can move back into the second spot,” general manager Walt Jocketty said. “We had to move Brandon around and he’s been great about it, but his best spot is batting second.”

The Reds also used rookie shortstop Zack Cozart higher in the order than they wanted because of the lack of a leadoff hitter.

“Cozart is a good example,” Jocketty said. “Cozart’s a good hitter, but he should be seventh or eighth. We put him in spots he wasn’t ready for last season.”

The Reds tried to get Choo from the Indians before the nonwaiver trade deadline last season. They finally got him in a three-team, multiplayer deal in the offseason.

“We discussed Choo with Cleveland before the trade deadline last year, but we couldn’t get a deal together,” Jocketty said. “We felt he has the speed to play center field. We have good outfield coaches in Billy Hatcher and Eric Davis. He’s in very good shape. He is 31 [in July] but he’s a young 31.”

Choo avoided arbitration with a one-year, $7,375,000 deal. The club was interested in signing Choo to a multiyear deal, but the outfielder wanted to take it one season at a time in Cincinnati.

Billy Hamilton is expected to take over as the center fielder and leadoff batter at some point. Hamilton, who set a professional record by stealing 155 bases in the minors last season, will play center field and bat leadoff for Triple-A Louisville to start the season.

The Reds think Choo could be more than a one-year fix.

“We talked to [agent] Scott Boras about a multiyear deal but decided to focus on this season,” Jocketty said. “It will give Choo a chance to see if he likes it here in Cincinnati.”