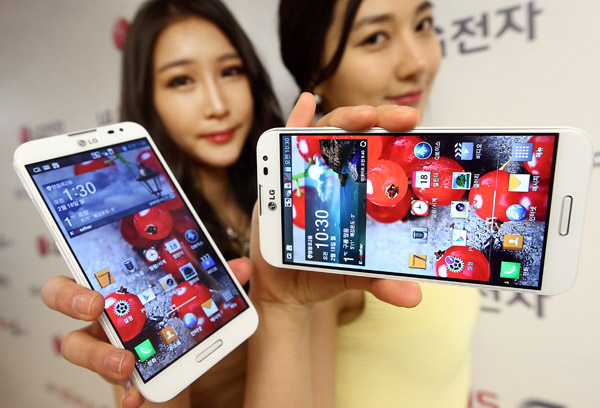 LG Electronics’ new Optimus G Pro, which will hit local stores tomorrow, was shown to the press at LG Twin Tower in Yeouido, western Seoul, yesterday. It is the company’s first full-HD display smartphone with a 5.5-inch screen. [YONHAP]

The company’s first full-HD display smartphone has a 5.5-inch screen.

The company expects that the new mobile device will help it shed the label of being a “latecomer” in the smartphone market.

Ma said the company’s smartphone division will grow even faster than the overall smartphone market and that growth will help the company add value to its brand.

“Instead of trying to promote our brand name itself [through marketing], we will leave the evaluation of the brand name to consumers and focus on making quality devices that consumers want to use,” he said.

The phone can take photos simultaneously with two cameras in front and back. The user can control the size of the image in a smaller frame and even move the frame to one corner or another to make it look like the photographer is posing with the subject.

Also, consumers won’t need to worry about missed calls and text messages when the smartphone is left at home. Simply send a text message to the phone, and it will even text back numbers programmed in the phone.

“Until recently, smartphones we released locally and globally were carrying not so many different functions, but customers did not know clearly how to get what they want out of their mobile devices,” said Ma.

“However, as consumers have matured and developed the features they want after using smartphones for some time, we try to accommodate different needs as much as possible.”

The company says it will launch the smartphone in Japan and North America after the second quarter of this year.