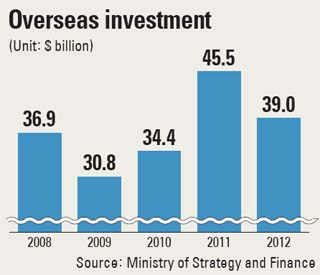 Due to prolonged uncertainty in the global economy, Korea’s overseas investment plunged in 2012 from a year earlier.

According to the Ministry of Strategy and Finance yesterday, the country’s overseas direct investments totaled $39 billion, a decrease of 14.3 percent from $45.5 billion in 2011.

Large businesses cut back their overseas businesses by more than 24 percent, from $38.7 billion in 2011 to $29.1 billion last year.

Korea’s investments in North America plummeted 44.2 percent to $7.81 billion, while investments in the Middle East and Europe surged 135.6 percent and 19.8 percent year-on-year to $870 million and $5.75 billion, respectively.

The United States was the largest investment destination for Korea at $6.9 billion, followed by China at $6.48 billion and Australia at $4.41 billion, the report showed.

“This year, despite the murky investment environment, the country’s overseas direct investment will likely grow slightly, given that the U.S. and Chinese economies are steadily recovering,” said Han Kyung-ho, a director at the Overseas Economic Bureau at the ministry.

According to a report by the UN Conference on Trade and Development, global foreign direct investment is forecast to grow at a slower pace this year and next due to vulnerabilities in the financial sector.

There are contrasting views on Korean businesses’ overseas investments, with some saying it shows they are not focusing on job creation and investment in the local market. Others see expansion of local companies into overseas markets in a positive light.