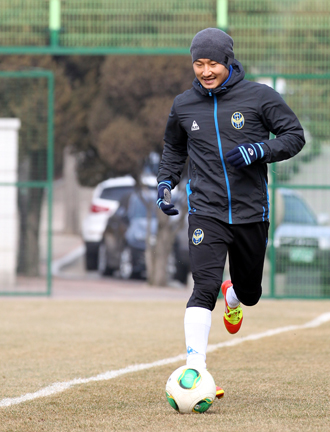 Lee Chun-soo trains in Incheon yesterday after the celebration Incheon United held to mark his joining the team. The World Cup star is returning to the K League Classic after a ban on him that had been in place since 2009 was lifted. The penalty was imposed as he tried to seek a spot abroad without first seeking approval from his then-team, the Chunnam Dragons. The 31-year-old striker was the K-League Most Valuable Player in 2005. [NEWSIS]