Park out, Lee in against Qatar

Park out, Lee in against Qatar 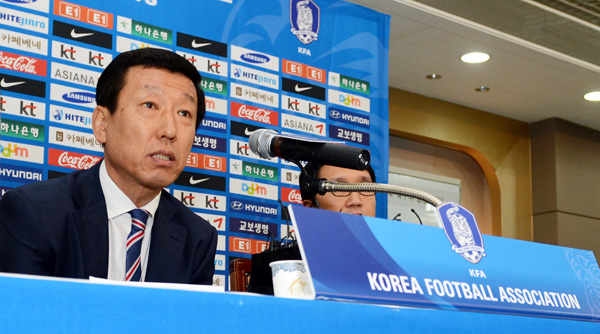 Korean national football coach Choi Kang-hee announces the 23-member roster for a World Cup qualifier against Qatar during a press conference at the Korea Football Association headquarters in Seoul yesterday. Park Chu-young of Celta Vigo was left off while Lee Dong-gook of Jeonbuk Motors got aboard. [NEWSIS]

Park Chu-young of Celta Vigo was left off the Korean national football team for a World Cup qualifier against Qatar later this month while his striker rival Lee Dong-gook made the cut.

National football coach Choi Kang-hee yesterday announced a 23-member roster that excluded Park for the first time in nine months. Lee, 33, got on board along with Son Heung-min, 20, of Hamburg. 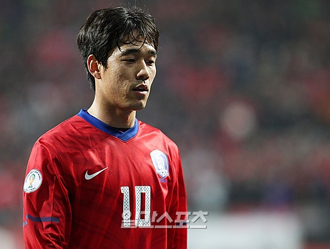 Korea will have its fifth qualifier for the 2014 FIFA World Cup with Qatar at home on March 26.

It indeed is the first time ever the 27-year-old forward was excluded from the roster under Choi’s leadership for a reason other than the controversy over his alleged attempt to dodge the compulsory military service that engulfed the local football community.

Choi did not call up Park for the qualifiers against Qatar and Lebanon, both in June of last year. The controversy regarding his military service ended when he received a military exemption as a member of the bronze medal team at the 2012 London Olympics.

Even when he was called in, Park’s role in the national team was limited in part due to the lack of chemistry with Lee, who was Choi’s protege at Jeonbuk Motors before Choi took the reins of the national team in December of 2011. Park, who scored 23 goals in 61 games for Korea, has not scored one for Choi. Lee scored one, his 142nd career goal, in the Motors’ first season game against the Daejeon Citizen on Sunday.

Korea’s bid to win an eighth-consecutive berth to the World Cup has been under threat since a 2-2 draw at Uzbekistan in September and a 1-0 loss to Iran in October.

Its winless streak totals four, including two tune-up matches that saw a 4-0 thrashing at the hands of Croatia in February and a 2-1 loss to Australia in November.

Choi did not detail why he did not pick Park against Qatar, but he said that he wanted to field a winning team.

Park’s recent struggle with the club also factored in to Choi’s decision, according to some football observers.

Park was given only 97 minutes of playing time as Celta Vigo had six recent La Liga matches. He started in only one of the games, sitting out the two most recent games.

Kim Bo-kyung of Cardiff City, whose pace has slowed with his club, was also overlooked by Choi. The 23-year-old midfielder, who scored the second goal of the season on Jan. 19, sat out the four recent matches.

Veteran defender Lee Jung-soo, 33, of Al-Sadd in Qatar was also left off the team, after he contributed to the loss to Croatia with his mistake-prone performance.

Nine members newly got on board, including goalie Lee Beom-young of Busan I’Park, who made crucial saves during the 2012 London Olympics. Ha Dae-sung, a midfielder of FC Seoul, Han Kook-young, a midfielder for Japan’s Shonan Bellmare, and Kim Chang-soo, a defender for Kashiwa Reysol in Japan, are among the other new members.

Korea is one point behind Uzbekistan in Group A, and is being chased by Iran and Qatar only by goal difference, although it played one game less compared with the other teams. The Qatar match is Korea’s opener of the second-half of the final qualifying round.

The Qatar match will be held at the Seoul World Cup Stadium in Sangam-dong at 8 p.m. on March 26.