WBC heats up as Pools A, B come to close

WBC heats up as Pools A, B come to close 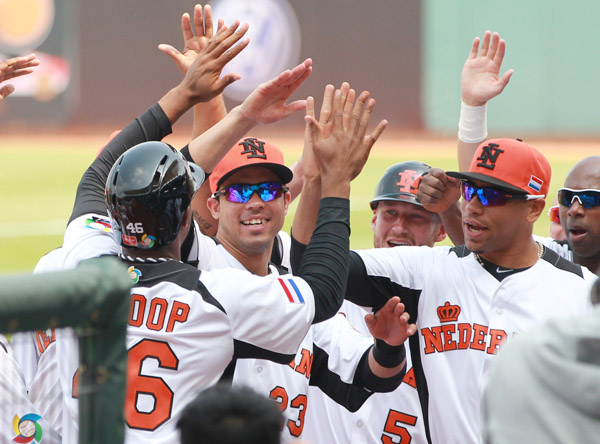 Jonathan Schoop (46) is congratulated by fellow Dutch players after hitting a two-run homer in a first round World Baseball Classic game against Australia in Taichung, Taiwan yesterday. The Netherlands beat the Aussies 4-1. By Lee Ho-hyung

The Netherlands became the first team in Pool B to reach the second round of the World Baseball Classic after it kept Australia in check in a 4-1 win in Taichung, Taiwan yesterday.

Pitcher Robbie Cordemans led his team to the win, keeping the Aussies scoreless in the first five innings and giving up only two hits at the Intercontinental Baseball Stadium. Jonathan Schoop led a three-RBI offense for the Dutch in the second inning with a two-run homer.

The Netherlands ended the first round at 2-1. It had earlier blanked Korea 5-0 and later lost to Taiwan 8-3. Korea and Taiwan, vying for the last ticket to Tokyo, were scheduled to square off at 8:30 p.m. yesterday, meaning the result came too late to print here.

After the game, the Dutch manager Hensley Meulens said the victory was truly a team effort.

“We needed a great pitching performance today, and we got it from [Cordemans],” Meulens said. “That was the key to our win today. Guys scored early to give him a little bit of breathing room. The rest of the bullpen did a great job. It was a great performance all the way around for the entire team.”

On Monday, Korea kept its hopes of advancing to the second round alive with a 6-0 victory against Australia after a 5-0 drubbing at the hands of the Netherlands.

Song Seung-jun of the Lotte Giants allowed only two hits and struck out five over four innings against the Aussies.

Lee Seung-yeop of the Samsung Lions created chances with two doubles and a single and Kim Hyun-soo of the Doosan Bears hit a two-run single to put Korea ahead in the first inning. Lee Dae-ho of the Orix Buffaloes also went 3-for-4, contributing to one RBI for the Ryu Joong-il squad. Korea had 11 hits against Australia, while it only managed four against the Dutch.

Korea had to beat Taiwan by more than five runs last night to be able to secure a berth in the second round over Taiwan.

If Korea beat Taiwan last night, that would leave Korea, Taiwan and the Netherlands in such a situation. The Netherlands, however, has secured a second place position at least with yesterday’s victory, as either Korea or Taiwan would have zero TQB or less after last night.

Yesterday’s game between Korea and Taiwan was their third duel at the WBC. Taiwan lost the two previous showdowns including a 2-0 loss in the first group round of the 2006 event. Korea also shut out Taiwan 9-0 in the preliminary stage of the 2009 event. Taiwan finished 12th in 2006 and 14th in 2009.

Meanwhile, Cuba and Japan already secured the two berths to the second round in Pool A.

Cuba, the runner-up at the inaugural WBC edition, routed China 12-0 on Monday before the game ended in the seventh inning on the mercy rule at Yahoo Dome in Fukuoka, Japan. Jose Abreu hit a grand slam homer in the fifth as Cuba extended its lead by 12 runs in the inning. Starter Danny Bentancourt only allowed one hit. He struck out eight over 4 2/3 innings.

Japan secured its second round seat at the expense of China on Sunday, with a 5-2 win in Fukuoka on Sunday.

The second round featuring the top two teams from Pool A and B will be held at the Tokyo Dome beginning on Friday.