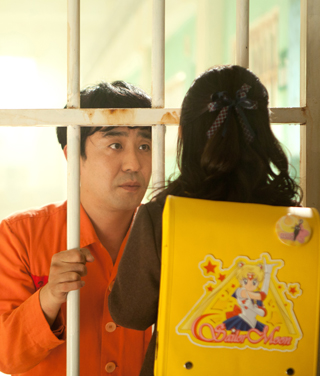 More than 11.75 million moviegoers showed up to see “Miracle in Cell No. 7,” making it the fifth-most-popular Korean movie ever. The melancholy flick features Ryu Seung-ryong as a father with a mental disability wrongly incarcerated for a crime he did not commit.

As of Monday, just a month after the release date, the number of viewers topped the 11.75 million mark, according to data compiled by the Korea Film Council.

It surpassed the number set by “The Brotherhood of War,” relegating it to the No. 6 spot. That film depicted the 1950-53 Korean War and was released locally in 2004, drawing a huge crowd with its A-list cast that included Jang Dong-gun and Won Bin.

If “Miracle in Cell No. 7” continues to do well, the movie will break the record held by No. 4 “The King and the Clown,” which attracted 12.3 million people to theaters.

Given its performance so far, there are high expectations that the film will surpass the 12 million mark in the coming weeks.