From Fin.K.L. to musicals, Oak remains a star

From Fin.K.L. to musicals, Oak remains a star 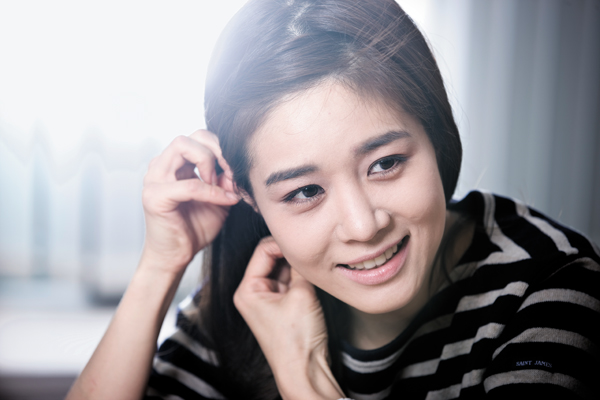 Audiences now recognize Oak Joo-hyun more as a musical actress than as a member of Fin.K.L, the female K-pop group from the late 1990s. With popular musical “Elisabeth” last year, Oak won best female performance at both the Musical Awards and the Korea Musical Awards. While many people thought that there would be no more heights for her to reach, she once again landed a big hit with the new musical “Rebecca.”

The 33-year-old puts on her own makeup before every performance in order to make the gradual transition into character. Due to diligent reading and practice beforehand, she creates a strong feeling of tension on stage when she first appears with a cynical smile. A mystery remains,
however, because the talented actress is playing a maid, “Mrs. Danvers,” which is a supporting role. To ask more about the changes in her career, the JoongAng Ilbo met the artist at the musical’s production office on Jan. 30.

Q. You’ve always played the main role since your debut as a musical actress. Why are you suddenly starring as a supporting character and especially as a villain?

A. Really? I thought this was the leading role. Just kidding. Of course, I was surprised when I was first suggested for the part. Transforming from the empress from “Elisabeth” to a housekeeper was very dramatic. Although the maid doesn’t take a big part, I wanted to give it a try as I listened to the music and studied the character. I have done the nice and pretty role many times so far and it’s enough. Acting out an old lady was the most difficult part, but I just let myself go naturally. You can’t know the depth of life before you actually experience it.

Do you get good comments on your performances nowadays?

I’ve done musicals for eight years now. It’s about the time to get compliments, isn’t it? But still, after each performance, I return home and regret thinking that I could have done better in this and that. I can’t even go to bed without sleeping pills when shows are running. I’m a little scared that I might be too obsessed with my work that I don’t even meet my friends these days. Recently, I’ve started to learn ceramics to relieve myself a little. I hope my acting gets better since I’m really working hard on it.

Who is Mrs. Danvers in the musical? On the first day of the musical, the composer Sylvester Levay was there. What did he say about your acting?

Actually, I couldn’t get close to other actors and actresses in the early training sessions because I also had to perform in another musical,

“Rudolf.” I think it was better that way since the character needed to project a cold image. It would have been difficult to concentrate on the role if I chatted with others backstage.

I just wanted to bear in mind what Levay advised me in Germany. He said that the figure of Rebecca, who actually never appears on stage, must be portrayed through Mrs. Danvers, and the acting should make the audience confused. On the musical’s opening day, Levay gave me positive feedback by saying that I kept the dignity of the character throughout the show.

Was singing the track “Rebecca” difficult? How do you sing the high notes so well?

The song was the highest ever. Singing “I Belong to Me” in “Elisabeth” was also high, but this time I had to hit the high pitch with a natural voice. It sounded almost like screaming.

Singing requires a process of analyzing. You need to carefully follow the notes. I’m not good at memorizing the lines but this is better. If you can do everything at once and lose tension, you might put yourself into a frame and lack objectivity. The character must breathe and be alive. Sometimes the different style and other details can be more effective. The personality of the role gets much clearer as you slowly fill in the gaps. There comes a time when you feel like you’re in harmony with all the moves.

Was there a moment where you felt your acting mature?

Well, not really, but I can say that the stage fright has gone since “Elisabeth.” My debut musical was “Aida” in 2005, and the reviews people left were horrible. When I was in the girl group, criticism was pretty much just thoughtless, but the musical viewers pointed out details such as flubbing lines and a bad eye-contact. I was afraid to read the comments for a long time but since last year, I freed myself from the concerns.

Comparing yourself to other members of Fin.K.L. and SES, a rival singing group, do you think you have had a happy life? Were you a kid with a dogged persistence who strived to become successful?

Everyone is having a good life in their positions. Some have gotten married and already have a baby. We are just pursuing different lifestyles. If I have to pick the most successful one, that would be Lee Hyori. She’s still an iconic singer and also an entertainer.

I was passionate about my singing. When I was in the group, managers said that I didn’t need extra training and they tried to stop me, but I went alone to the U.S. for more vocal lessons. I learned jazz and soul music there and it helped me to sing better like now. During that time, I had a complex about my face and body, so I needed something else to reward myself.

Did the beauty surgery and losing weight help you to overcome the inferiority? What do your detractors say about you nowadays?

Yes, partially. I guess you just have to go through the hardships to get out of it. Well, they don’t say much these days. Hearing nothing is harsher sometimes. The most difficult time was after being surrounded by the rumor that I had a fight with Lee So-ra (a well-known singer in the 1990s) while shooting “I Am a Singer.” Even when I was reading out the letters on my radio program, malicious messages kept floating up on the screen and they were painful to read. Now it feels like a very long time ago.

I heard that you went through depression. Is that true?

While I was working on “Aida” in 2006, my yoga business failed. I lost a tremendous amount of money and also people close to me at the same time. I was desperate and felt like standing naked in front of City Hall. I went through the hardships that a 50-year-old who is in charge of a family might experience. That’s when I started to get used to the reality, and walk through the criticism of the crowd.

You know, if you get bad comments too often, rather messages such as “I like you” feels awkward. I get more insecure thinking of stronger criticism that I might encounter afterwards.

First of all, I don’t like reading the comments because I might lose control of myself. I keep trying to stay positive reminding myself that I could develop and continuously change what the anti-fans dislike about me.

Don’t you feel bad about the personal abuse? How can you stand the harsh attacks?

Anyone would feel bad of course, but there’s not much you can do about it. Sometimes I think it’s my fate to tolerate all the slander. From the malicious comments, now I use the positive ones to fix my attitude while ignoring the rest of them. I’m pretty strong I think. I had enough guts and perseverance to stand against the detractors and be here right now. Looking back, I should thank them. I’m not trying to be polite. I could develop myself because of the fans who hated me in the past. Truly, I want to say thanks.

It’s already been 15 years since my debut. I was a bit more mature than other kids. I had to take care of my younger brother. My father died when I was 13, and my mother got her second marriage when I was in high school. The fortune-teller even said that I was destined to have some family difficulties. I didn’t want my mom to notice that I was going through hard times, so I have always tried to act like a brave girl.