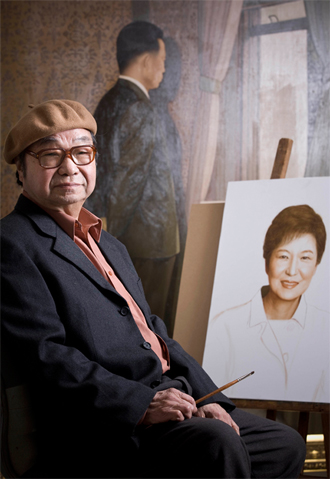 Self-educated painter Jeong Hyung-mo always dreamed of becoming a famous painter like Diego Velazquez or Francisco Goya and now paints the presidential portraits that hang in the Blue House. By Kwon Hyuk-jae

Jeong Hyung-mo might have the most important job of any painter in Korea. Since the Park Chung Hee era, he has been tasked with creating portraits of the country’s presidents. He was working on President Park Geun-hye when the JoongAng Ilbo visited his art school in Hongje-dong, northern Seoul, late last month.

“I was just practicing with her election posters,” said Jeong.

His gallery was a showcase of high-profile figures including Park Chung Hee, his wife Yuk Young-soo, Pope John Paul II, who visited Korea in 1984, and Cardinal Kim Soo-hwan, who passed away in 2009.

Among the 10 pieces on the wall at the Blue House, three of them are Jeong’s, including the former presidents Chun Doo Hwan, Kim Dae-joong and Lee Myung-bak.

While the 77-year-old was working on President Lee’s portrait last fall, they met only twice.

“Usually, the task is given a year before retirement, but I had less time to work on this piece, so it was a tight schedule,” said Jeong.

He said that there are people who ask him to alter their faces to look better, but he thinks capturing natural figures is more important.

“Sketching a person is a difficult process because you need to satisfy the viewers and myself, and also express what the person pursues at the same time,” Jeong said.

From a young age, Jeong hoped to become a famous painter like Diego Velazquez, a Spaniard who was the leading artist in the court of King Philip IV, and Francisco Goya, a court painter for the Spanish Crown.

In the late 1950s, he decided to pursue his dream by becoming a trainee at an art gallery in Donghwa Department Store (the current Shinsegae Department Store). After three years, he was able to have his own art space.

Above, from left, are Chun Doo Hwan, Kim Dae-jung and Lee Myung-bak. By Kwon Hyuk-jae

Although Jeong did not attend college or have much experience, he soon received several orders and people who wanted to be his pupils showed up at his office.

With five children, the country-born painter barely made ends for much of his career.

“There were times that we didn’t have anything to eat,” said Jin-mi, the painter’s second daughter. “My mom had to walk around the streets to sell dad’s artwork.”

His situation improved when he presented a portrait of Yuk as a gift to the Blue House after her death in 1974. The following year, Park Chung Hee, the father of sitting President Park Geun-hye, asked for another drawing to mark the first anniversary of Yuk’s death.

When President Park acted as first lady in the 1970s after her mother’s death, Jeong drew her several times. He hopes to draw her again when she retires from the presidency.

“I would definitely put my best efforts into that portrait. Her looks will change a lot in the next five years,” he said.

In the meantime, he said he will keep busy.

“I wake up at 6 a.m. and exercise in the afternoon,” Jeong explained.