Nadal rocks in his hardcourt return

Nadal rocks in his hardcourt return 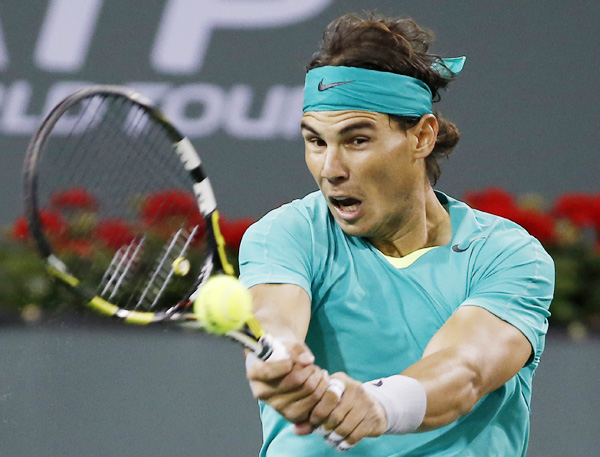 Rafael Nadal of Spain smacks it back to American Ryan Harrison at the BNP Paribas Open in Indian Wells, California, on Saturday. Nadal made a successful return to the hardcourt surface with a 7-6 6-2 victory. [REUTERS/NEWSIS]

INDIAN WELLS, California - With the tennis world watching closely, Rafael Nadal made a successful return to Indian Wells with a 7-6 6-2 victory over Ryan Harrison in the second round of the BNP Paribas Open on Saturday.

Though initially looking a little rusty, the Spanish left-hander showed no visible sign of discomfort after being sidelined for seven months last year by a left knee injury before sealing the win in just over an hour and a half.

Playing his first match on a hardcourt surface in 346 days, Nadal edged a close first set 7-3 in the tiebreak, then broke Harrison’s serve in the third and fifth games of the second to take firm control.

The Spanish world number five, who had his left knee taped up through the match, served out to book his place in the third round, ending Harrison’s brave challenge with an overhead smash to spark loud roars from the crowd.

“I am very happy to be back here at Indian Wells for sure,” Nadal, who clinched the Indian Wells title in 2007 and 2009, said courtside. “It’s one of my favorite tournaments and I love being here.

“I didn’t know if I was going to be able to come two weeks ago but I am very happy to be here.”

Nadal, who has enjoyed a successful tournament run on clay in recent weeks, was given an electrifying welcome by a vocal crowd when he first walked out on to the showpiece Stadium Court.

He made a confident start, racing into a 4-1 lead before his 73rd-ranked opponent broke back in the seventh game to take the opening set into a tiebreak.

Nadal, who had occasionally blasted his ground strokes long as he tried to find his range, stormed 5-1 ahead in the tiebreak before wrapping up the set in 54 minutes after he struck a deep forehand which forced an error by Harrison.

The Spaniard did not look back, breaking Harrison in the third game of the second set with a stunning crosscourt pass and also in the fifth with a dipping forehand service return which the American could not retrieve.

While Nadal did not attempt to slide in his customary manner as he moved from side to side in some of the longer baseline rallies, he did not appear to be in any discomfort on the surface expected to trouble him most following his knee injury.

The Spaniard, who returned to the ATP circuit last month in South America where he competed in three relatively minor claycourt events, winning two of them after reaching all three finals, will next face Leonardo Mayer of Argentina.

Federer, who won his fourth title here last year, lost just four points on serve, all in the first set.

Two of those were by double faults, and he never faced a break point and won 96 percent of his first serves.

“It felt good from the start, and I was able to maintain that level of play,” Federer said. “I never thought he got into the match at all. That gives you obviously even more confidence.”

“I did what I could,” Hewitt said. “I think I handled his serve pretty well, and I made him hit a lot of balls.”