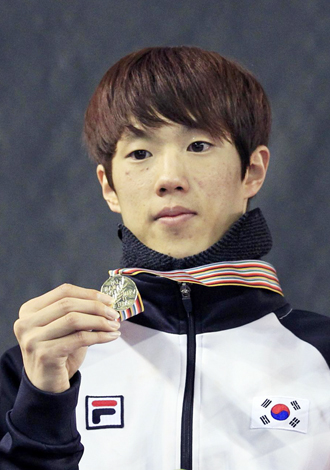 Sin, 19, tallied 89 points at the ISU World Short Track Speed Skating Championships held between Friday and Sunday in Drebecen, Hungary. He came in ahead of his compatriot Kim Yun-jae, who earned 55 points in total. Charles Hamelin of Canada finished third overall with 39 points.

The winner of an event gets 34 points, second place gets 21 points and third, 13.

Korean men have held an iron grip on the world championships since 2009, when Lee Ho-seok was crowned overall champion. Lee defended the title in 2010, and Noh Jin-kyu and Gwak Yoon-gy took the top spot in 2011 and last year, respectively.

Park led in overall points until Saturday but relinquished the lead to Wang Meng of China after being disqualified in the semifinals of the 1,000-meter on Sunday. Wang won the overall title with 68 points.