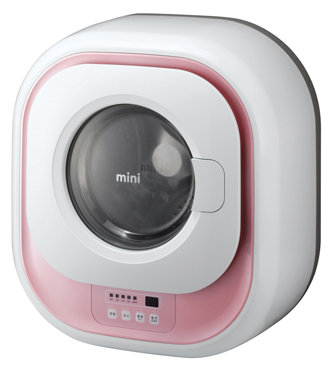 In a Korean home appliance market dominated by Samsung Electronics and LG Electronics, Daewoo Electronics has found a niche: a mini-washer that can be mounted on the wall, the first of its kind.

Launched last May, the Mini sold 20,000 units last year, which Daewoo describes as an unexpected success. The company forecasts global sales of 10 times that this year amid robust export deals in Asia, South America and Europe. Recently, large retailers in Japan, Brazil and Spain requested the rights to exclusive sales of the Mini and contracts with them are imminent, according to Daewoo spokesman Gwon Dae-hoon.

Samsung and LG have waged a fierce battle in a costly, large capacity segment when it comes to washers - between 17 and 19 kilograms - in the past several years. The Mini has a capacity of 3 kilograms and a price - 340,000 won ($310) to 450,000 won depending on the model - that is a quarter of what big Samsungs and LGs cost.

Mounting the Mini on a wall not only saves floor space, but the backs of owners who no longer need to constantly bend over to load and unload laundry.

Kim Gyung-hak, chief of the washing machine research center at Daewoo Electronics, says the Mini was inspired by wall-mounted televisions. A small washer on the wall would take up no floor space and eliminate day-to-day hand washing of a small amount of laundry, he thought.

“We started from scratch when it comes to developing the motor for the Mini since we needed to find a way to minimize oscillation and prevent noise from leaking out of the machine,” said Kim. Mini users say it is remarkably quiet.

Compared with widely used 15-kilogram (33-pound) drum washers, the Mini has slashed washing time by 60 percent, water use by 80 percent and electricity costs by 86 percent, according to Daewoo. Compared to standard size machines, the cost of running the Mini one time is as much as 45 percent less. Its capacity means the machine can do a load of nine towels or five shirts in 29 minutes.

Understandably, the biggest demand for the Mini has been from households with babies, followed by single households. Some buyers have larger machines, but want the convenience of a Mini in a kitchen or bathroom.

Both Samsung and LG, top players in the domestic home appliance market, offer small washing machines with capacities of 3 to 6 kilograms, but they are traditional top-loaders.

The smallest one from Samsung is called Agi Sarang, or baby love in Korean, and caters to households with infants. The 3-kilogram machine debuted in June 2002 and targets families with newborns.

It heats water to a temperature of up to 95 degrees Celsius (203 degrees Fahrenheit) to eliminate germs (with Mini, the maximum is 80 degrees Celsius) and has a large number of rinse cycles. Samsung says the machine costs 429,000 won and has accumulated sales of more than 400,000, which translates into one of six households with newborns.

Encouraged by the success of the Mini, Daewoo in Japan last week launched a 150-liter refrigerator, about a sixth the size of premium refrigerators. The product has its freezer on top.

“You can grab the attention of consumers and raise brand recognition only when the producers reflect local culture and taste,” said Kang Jong-gu, head of Daewoo’s Japanese branch. “We aim to advance our market share in Japan with products that combine technology and culture.”

Experts say Daewoo Electronics has much room for growth in markets abroad since it still maintains sales networks in 34 countries - in particular in South America, the Middle East and Eastern Europe - that it obtained during the 1990s. Sales from outside Korea represent about 80 percent of the company’s total.

“Daewoo Electronics’ reputation may have been tainted compared with the past, but it still is strong in mid- and low-priced white goods,” said an industry watcher.

Lee Jae-hyung, new chief executive of Daewoo Electronics and Dongbu’s vice chairman, has ambitions for Daewoo Electronics to be a prestigious electronics maker in the long run. “Toyota was recognized as a mid-priced car producer until Lexus,” he said at a press conference last month. 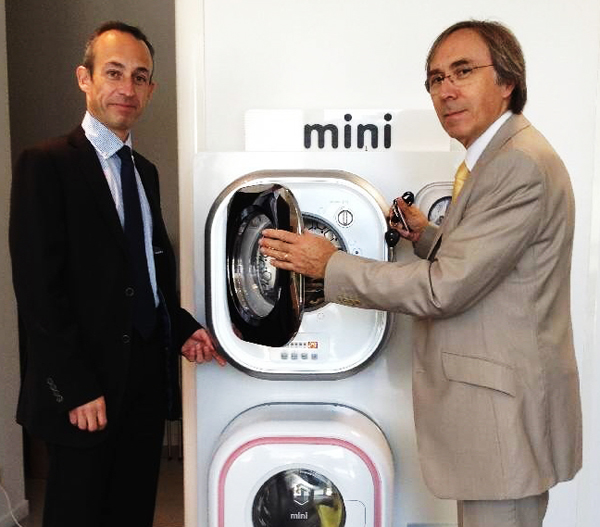 A employee of Daewoo Electronics’ French branch, left, introduces the Mini washing machine in August. Provided by the company

After repeated efforts to find a new owner since 2006, Daewoo was acquired in January by Dongbu Group, which has construction, steel and securities units. Dongbu bought Daewoo for 272.6 billion won from its creditors and considers the Mini an innovative product that “has contributed to the evolution of washing machines,” says Daewoo spokesman Gwon.

Daewoo Electronics enjoyed its heyday in the 1990s when it claimed as much as 30 percent of the Korean home appliance market. But it entered into a debt workout program along with 12 other affiliates under Daewoo Group in 1999 - right after the Asian currency crisis. It chose to sell unprofitable units such as semiconductors and car audio and focus on a few key products - washing machines, refrigerators, microwaves, vacuum cleaners and fans.

Over the course of that difficult period and several rounds of restructuring, Daewoo Electronics saw the number of domestic workers drop to 1,400 at the end of last year from 12,000 in the late 1990s. Its new mother company, Dongbu, with an estimated 60 trillion won in assets and sales revenue this year projected at 30 trillion won, has pledged to expand the product lineup over the next four years.

By the end of next year, Daewoo will be outsourcing from its overseas branches to produce and sell air-conditioners, vacuum cleaners, electronic ovens and dishwashers.

The firm will further develop a clean-up robot, gas oven and water purifier starting in 2015 and home medical devices by 2017.