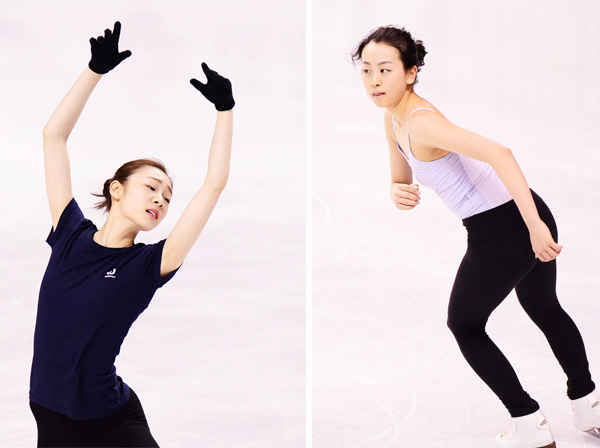 Kim Yu-na of Korea, left, and Mao Asada of Japan, right, skate separately during practice sessions at the ISU World Figure Skating Championships in London, Ontario, on Tuesday. The archrivals will lock horns at the Worlds for the first time in two years. The short program will start tomorrow morning Korean time; free skating is on Sunday morning.[NEWSIS]

With Kim Yu-na’s comeback at the world championships imminent, attention is turning to the rekindling of her rivalry with Japanese star Mao Asada.

Kim and Asada have dominated woman’s figure skating since their junior years. In their last year as juniors in 2006, Kim won the world title and Asada was the runner-up.

On the senior stage, they have met 13 times on the ice so far, and Kim is slightly ahead, receiving more points than Asada in seven of their duels.

The rivalry peaked during the Vancouver Olympics, where Kim brought Korea its first-ever gold medal in figure skating with a world record 228.56 points. Asada settled for silver, with 205.50 points.

But after the 2011 worlds, Kim took a break from competition to devote herself to studying at Korea University, shooting commercials and helping the city of Pyeongchang win its bid for the 2018 Winter Olympics. Asada has also been less visible as she went through a prolonged slump.

The rivalry was renewed in December with Kim winning her comeback event, the NRW Trophy in Dortmund, Germany, at a season high 201.61 points. That surpassed Asada’s then season-high 196.80 points.

But Asada answered back, with another season high 205.45 points at the Four Continents Figure Skating Championships in Japan last month. Asada received a season high in both the short program, with 74.49 points, and the free skate, with 130.96. Kim received 72.27 points in the short program and 129.34 points in the free skate at the NRW Trophy, a second-tier event that she entered to get the minimum amount of points to compete in the worlds.

Kim apparently has Asada in mind as the worlds get underway.

At a press conference before leaving for Canada on Sunday, Kim said she felt pressured by the media comparison between her and Asada, adding that she made a comeback to challenge herself, not to revive the rivalry. Kim announced in July that she will compete at the 2014 Sochi Olympics and then retire.

“But, I have steadily competed against Mao, so I won’t be able to avoid it,” Kim told the press conference. “Mao will do her best and so will I.”

Asada will be a bigger threat to Kim if she nails her triple axel, a risky technique she successfully executed in her short program at the Four Continents.

Asada attempted several triple axel jumps during training upon her arrival at Budweiser Gardens yesterday Korean time, but the execution was shaky overall, and she fell once. She told reporters that she is still warming up and that it will be better in the real competition.

Some Korean experts say that Kim has a better shot at winning than Asada. Japanese media including the Nikkei reported yesterday that Kim will be Asada’s most notable competitor.

But Kim will have to rein in the mistakes in order to clinch the title. She finished runner-up two straight times at the worlds, in 2010 and 2011, largely due to landing mistakes.

“The 2010 Vancouver Olympics was the first competition ever where I completed my short and free programs without any mistakes. Clean programs, that in itself is a huge accomplishment,” Kim told reporters after yesterday’s practice. “Delivering a clean program requires a lot of practice beforehand.

“I truly believe that if I do practice a lot, I can deliver such perfection once again.”

During yesterday’s practice, Kim gave a flawless performance, but she said she was nervous.

“The two competitions before worlds, I did pretty well,” Kim said. She also won the national championships in January with 210.77 total points.

“This time around, although I’m very nervous and worried, I’m sure I can deliver good results.

“The pressure is still there, I feel it. But I try not to feel it too much,” she said.