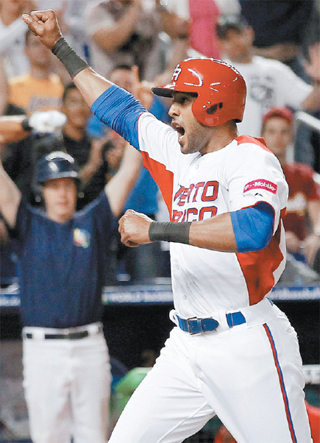 Puerto Rico’s Alex Rios crosses the plate to score the winning run in the eighth inning against Italy at Marlins Stadium in Miami, Florida on Wednesday. [REUTERS/NEWSIS]

With the score tied and two outs, Puerto Rico’s Alex Rios kept running from second base.

Rios scored the go-ahead run without a play, and the Puerto Ricans rallied to oust Italy from the World Baseball Classic with a 4-3 victory Wednesday night.

The Puerto Ricans went hitless in their first 12 at-bats with runners in scoring position, but overcame a 3-0 deficit to score once in the sixth inning and three times in the eighth.

“With the lineup we had, it was a matter of time before we started scoring,” Puerto Rico manager Edwin Rodriguez said. “Everybody was putting a little pressure on themselves.”

Rios crossed the plate standing up for the final run on a grounder to the shortstop, which Jack Santora backhanded before throwing wide to first.

That was one of four misplays by Italian shortstops, including three in the sixth by Anthony Granato, who allowed an unearned run to score.

“We had problems scoring runs, but we were putting pressure on them,” Rodriguez said. “The breaks went our way, and we took advantage of them.”

Yadier Molina had three hits for the Puerto Ricans and scored their first run.

“We are only in March,” Molina said, “and you’re facing pitchers throwing 95 and 96 miles per hour. You see it on a daily basis. I looked for my hits, and the team followed me.”

The Italians blew a 4-0 lead in a loss Tuesday to the Dominican Republic.

The Puerto Ricans advance to Friday’s game against the winner of Thursday night’s game between the United States and Dominican Republic. R.A. Dickey will start for the U.S. team and Minnesota Twins right-hander Samuel Deduno goes for the Dominicans.

“We had faith as a team,” Burgos said. “I tried to keep us in the game and give us a chance to win, and the batters did what they had to do.”

Fernando Cabrera struck out Alex Liddi with a runner at first for his second save, and the Puerto Ricans poured out of their dugout.

Italy’s Anthony Rizzo broke a scoreless tie with a three-run double in the fifth, and Puerto Rico trailed 3-1 going into the bottom of the eighth.

Carlos Beltran led off with a walk, took third on a single by Molina and scored on Mike Aviles’ groundout.

Rios singled off Brian Sweeney (0-1) to put runners at the corners and took second when Luis Figueroa hit a sacrifice fly to make it 3-all. Andy Gonzalez beat out an infield hit when Santora threw wide to first baseman Rizzo, and Rios came around to score.

“I saw him rounding,” Rizzo said. “I figured it was going to be a tough out. The game was just a funny game. Tip your hats to the Puerto Ricans for not giving up.” AP