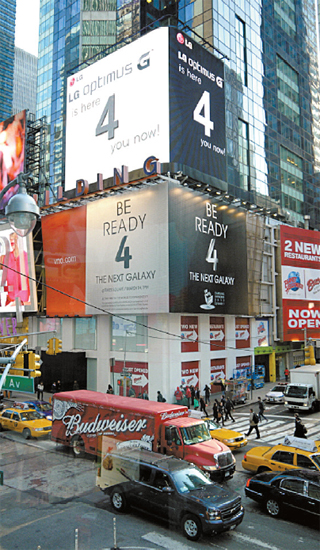 Korean rivals Samsung Electronics and LG Electronics have advertisements to promote their flagship smartphones - the Galaxy S4 and Optimus G, respectively - on a corner of Broadway in New York’s Time Square. Provided by LG Electronics

LG said yesterday it changed an outdoor display ad for its flagship smartphone, the Optimus G, on a giant electronic display on Broadway in New York’s Time Square - which is located directly above a teaser billboard for the Galaxy S4, which Samsung put up a week earlier.

LG’s ad mimics the white-letters-on-black-background motif of the Samsung teaser.

Samsung’s ad reads: “Be ready 4 the next Galaxy.”

LG’s ad has two messages that alternate. The first is “LG Optimus G is here 4 you now!”

The second: “It’ll take more than 4 to equal one LG Optimus G.”

It is the first time Samsung has launched a Galaxy S model in the U.S., the home turf of archrival Apple. Previous launches have been in London, Barcelona and Korea.

LG, Korea’s second-largest electronic appliance and smartphone producer, admits the phrases on its display were “intentional.”

“We have been keeping the board since 1992 and our direct competitor [Samsung] has made an abrupt appearance right below us,” said an LG spokesman. “It’s an obvious provocation, and we couldn’t just sit still. That’s why we have replaced the old Optimus G ad with the new one.”

Apple, Samsung’s biggest rival in both the marketplace and courtrooms around the world in a battle over patents and allegations of ripping of technology, also took aim at Samsung yesterday.

Phil Schiller, Apple’s senior vice president, touted his company’s iPhone by saying that Apple lures away four times as many Android smartphone owners to buy iPhones than it loses to competitors in an interview with Bloomberg News.

“Our products are innovative, and customers are buying them,” Schiller was quoted as saying.

LG also tried to take some wind out of Samsung’s sails by saying that a technical upgrade to its Optimus G Pro, the top device in the Optimus G lineup, will give it the same kind of eye-tracking function rumored to be on the new Galaxy S4.

One of the most talked-about functions said to be on the Galaxy S4 is an “eye-scrolling” function, an improvement on the “smart stay” function offered in the preceding model, the Galaxy S3.

With the technology, when a user’s eyes get to the bottom of a screen, the smartphone’s front-facing camera automatically turns to the next screen.

LG said yesterday that owners of the one-month-old Optimus G Pro will be able to download a software upgrade next month that includes its eye-tracking function, which it calls a “smart video” feature.

Providing an upgrade just a month after a product launch is unusual.

Samsung’s Galaxy S3 was launched on May 3, 2012 and has sold over an estimated 40 million units globally.