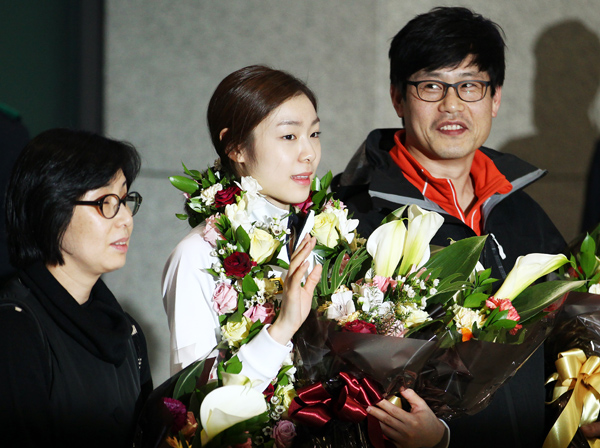 Kim Yu-na said yesterday that Korea needs to make a bigger investment in its figure skating future if it wants to see more top athletes in the field.

“The training environment these days is much better than when I was young, but there’s still a shortage of training time and ice rinks compared to the growing number of young athletes,” Kim told a news conference at the Incheon International Airport yesterday, after arriving to a heroes’ welcome with her second world championship title.

Her victory at the 2013 World Figure Skating Championships in Canada on Sunday Korean time has earned the country a total of three berths at the 2014 Sochi Olympics, a perk Korea has never enjoyed before.

Kim, who spurred a figure skating boom here with a gold medal at the 2009 world championships and another at the 2010 Vancouver Olympics, both Korean firsts in the sport, has been an advocate for the development of figure skating.

She also helped the Korean city of Pyeongchang win the right to host the 2018 Winter Olympics, which she said would give more opportunities to Korean figure skaters to compete on the global stage. But none of the other Korean figure skaters currently competing on either the senior or junior stages are viewed as having the potential to match Kim.

“There should be more ice rinks that focus on the training of athletes,” Kim said. “In addition, athletes need more support in doing more overseas training.”

“I hope they can experience big events such as the Olympics and the world championships and work hard, look forward and have big goals,” she said.

Kim continued to inspire in her first appearance at the worlds in two years, scoring 218.31 points in Canada, her second-highest mark. Her highest, and the highest-ever, was her 228.56 from the Vancouver Olympics. She returned from a 20-month break in December and competed in two events before the worlds.

She said that even though it was a short season, 2012-13 would linger in her memory.

“I was so happy that I could show everything that I prepared, and won it with a feel-good performance in both programs,” she said. “It was a comeback after such a long time, and I was able to do well thanks to the support of my fans.”

Kim, who announced her plan to retire after competing in the Sochi Games, said she will do her best in every single event of her final season as an athlete. Kim said that she will train in Korea, except for a brief time to master the choreography for her new program. She said that she feels “at home” here.

At the press conference at the airport, Kim was also asked about two teenage athletes she competed against at the 2013 worlds, American Gracie Gold and Li Zijun from China. Gold, 17, and Li, 16, who finished sixth and seventh in their world debuts, respectively, both said that Kim is their role model.

Kim said she appreciated the sentiment, but felt they’re still too inexperienced to win the next Olympics.

“I think skaters like Gold and Li Zijun will shine more in Pyeongchang than Sochi,” she said, referring to the 2018 Winter Games.

“They will need more experience on the senior stage. If they become veterans and build their experience, I think they will be greater athletes than they are now.”