Yeosu businesses fight to stay afloat months after the Expo

Yeosu businesses fight to stay afloat months after the Expo 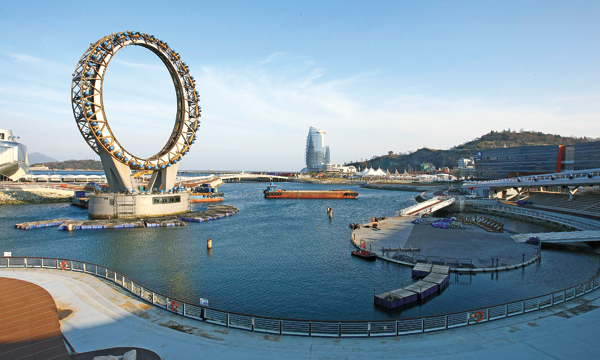 The Yeosu Expo complex sits empty Wednesday as most exhibition buildings are now closed. Since the 2012 Yeosu Expo wrapped up in August last year, the only exhibit open is Aqua Planet, a four-story aquarium that was one of the must-see exhibitions during the World Expo. By Oh Jong-chan

YEOSU, South Jeolla - Stepping out of the Yeosu Expo Station train station in Yeosu, South Jeolla, impressive looking buildings come into view, a reminder that the once-unremarkable city on the southern coast of Korea hosted the 2012 World Expo, which drew over eight million visitors during its 92-day-run.

What has changed since the end of the three-month international event is what is going on inside the 250,000-square-meter (61-acre) Expo site.

Most of the exhibition buildings are now temporarily closed. The only exhibition still open to visitors is Aqua Planet, the country’s largest aquarium, home to over 200 marine species.

Even though the decline in the number of visitors of the port city was inevitable, businesses are still at a loss how to keep up operations.

“I hear complaints from hotel managers here that they don’t even have 30 percent of their rooms booked these days,” said Jang Sang-bae, head of the Yeosu Lodging Association.

Another resident Song Jo-han, who runs a chicken restaurant near the expo site, said sales have “shrunk by 30-40 percent” compared to last summer when the Expo was under way.

The city government is trying to come up with measures to revitalize the Expo area amid mounting worries that the Yeosu Expo site, where around 10 trillion won ($8.99 billion) was spent to construct exhibition buildings and infrastructure facilities, could be a repeat of what Daejeon experienced over the past 20 years.

Daejeon, home to the 1993 World Expo, still suffers financial strain due to its failure to effectively manage the facilities that were built for the event.

Yeosu City Government is working to reopen the expo complex on April 20 but luck does not seem to be on its side.

The Big-O, a spectacular circular-shape ring which projects kaleidoscopic shows on a giant screen of water that was picked as the most popular among the visitors last summer, has been under construction since it was damaged by Typhoon Sanba in September last year.

“The spectacular Big-O show that won high popularity last year could resume in late June at the earliest,” said a city government official who requested anonymity.

Resuming the Big-O show alone will not fix the underlying issues of a long-term management plan. The government and the local community are split on who should have the ownership rights to the expo complex.

The government made it clear it will sell around 95 percent of the complex to private investors for around 530 billion won, while the local community prefers the government-led management.

The first bidding for the sale failed last December as no entrepreneur showed interest. But the government is adamant about its selling plan.

“We will offer a variety of tax incentives for the second bidding. There will be no change in the plan to sell the complex,” said an official at the Ministry of Land, Infrastructure and Transportation involved in the bidding process, who spoke on condition of anonymity.

The government’s firm stance on the plan comes from its bitter experience in dealing with the Daejeon Expo complex. What was once used as an amusement park and science-related tour facility after hosting the 1993 World Expo could not avoid mounting debts. It was eventually ordered by the Ministry of Safety and Public Administration to go into liquidation in 2008.

Lee Gak-gyu, head of the Korea Regional Culture Event Institute, said the government should pay more attention to its after-use plan for international events such as a world expo.

“It is inevitable that after-use management is staggeringly difficult when people are increasingly indifferent to the site once the event is over,” said Lee.