Korean car parts industry finds a place in the sun

Korean car parts industry finds a place in the sun 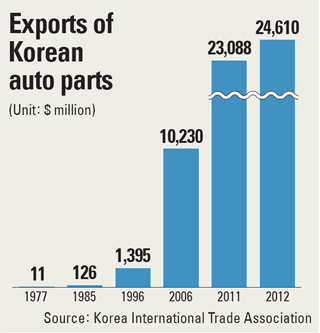 According to data from the Korea International Trade Association (Kita), exports of auto parts last year hit a record $24.6 billion. Imports of auto parts were only $4.9 billion, leading to a surplus of $19.7 billion in the trade.

This is a huge turnaround from 1977, which Kita started to collected trade data by products. In 1977, outbound shipment of Korean auto parts accounted for only $11 million and Korea ran a trade deficit in auto parts of $114 million.

However, as local automakers beginning to construct plants overseas, auto part manufacturers took off. In fact, they’ve grown at a great rate than Korea’s other main export products such as semiconductors, mobile devices and steel plates.

Last year, $44.58 billion worth of auto parts were shipped to China, and Korea saw a trade surplus of $31.58 billion, which was a record. In the United States, the auto parts industry ran a surplus of $52.77 billion.

What’s even more impressive is that Korean companies are doing well in Japan and Germany, countries that are known for the high quality of auto parts.

In 1992, Korean auto part exported $70 million worth of auto parts to Japan, while the country imported $601 million worth. Although there’s still a trade deficit with Japan these days, last year’s was $367 million, the smallest figure since 1999.

Trade between Germany is also trying to escape the red. In 1992, Korean companies imported $78 million worth of auto parts, which was 500 percent higher than their export of $13 million. But last year, German auto part imports were $786 million, just 144.4 percent larger than Korean auto part exports of $322 million.

Industry analysts think the trade deficit with Germany, which is around $400 million yearly, will decrease in the future as German automakers show more interest in Korean auto parts.

This January, nine auto part makers visited the development center of Porsche to show their products to the German sports car maker. This was the first time that Porsche held such an event for Korean auto part companies

BMW said it is also looking forward to working with Korean companies. Next month, the German premium carmaker will invite local companies to Munich to show their wares.

Local automakers said that they will continue to help their suppliers spread their wings for sales abroad.

“We actively took our suppliers overseas when we build plants,” an official from Hyundai Motor said.

Ssangyong Motor, the nation’s smallest automaker, held a general conference yesterday to honor its suppliers and discuss ways their suppliers can work with Mahindra Group in India.