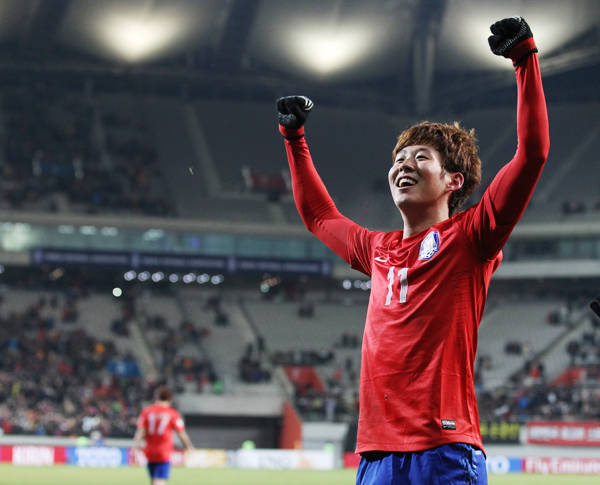 Son Heung-min reacts to cheers from the crowd after scoring the last-minute game winner in Korea’s 2-1 victory over Qatar in a 2014 FIFA World Cup qualifier at the World Cup Stadium in Sangam-dong, western Seoul on Tuesday. By Lim Hyun-dong

After saving Korea from a mediocre 1-1 draw against Qatar with a last-minute match winner on Tuesday, Son Heung-min said that he feels like weight has been lifted off his chest.

“Frankly, I felt intimidated by the talk about my being in a slump with the national team and lost confidence,” the 20-year-old Hamburg striker told a news briefing after Korea edged the visitors 2-1 in a World Cup qualifier in Seoul Tuesday night. “But my teammates helped a lot, and I was able to score a goal,” he said.

“I think I’ll be able to play more confidently from now.”

It was Son’s first goal in more than two years in the Taegeuk uniform. He first made the national team in December of 2010 and has played 13 games for Korea since. He scored his only other goal in January 2011, when Korea routed India 4-1 during an Asian Cup game.

He has scored nine goals for his German club this season but has often been overlooked by Korean national coach Choi Kang-hee, who played him as a substitute. He was called into the Qatar match in the 80th minute to replace Lee Keun-ho, who scored the country’s first goal.

Son’s winner came almost six minutes into the second injury time, when Lee Dong-gook’s volley hit the crossbar. Having positioned himself under the bar, Son tapped it past Qatari goalkeeper Qasem Burhan, sending the over 35,000-strong crowd at the Seoul World Cup Stadium into a frenzy.

“Rather than it being me that scored, all the players worked it hard,” said Son, who is the youngest of the 23-member squad. “That’s how we earned three points, and I like it.”

He said the goal will also boost his confidence when he returns to Hamburg.

“I didn’t score for nearly two years with the national team, and I was able to score in such an important situation and contribute to the team’s victory. That’s important,” Son said. “When I return to the club, I’m going to try harder and give a good performance.”

Son has failed to score in his four most recent Bundesliga games. One more goal will enable him to join Cha Bum-kun as a Korean who has had double-digit seasons in the Bundesliga. Cha, now 59, scored 98 goals in his 308 games over 11 Bundesliga seasons between 1978 and 1989.

Son said he was trying not to be overly aware of the record.

“I’ve scored nine goals in Bundesliga [this season] and don’t want to feel pressured about a 10th,” he was quoted as saying by Financial News before leaving for Germany yesterday. “If I can keep in step with the players, good luck could come along like in the Qatar game.”

Son declined to comment on rumors of a transfer to one of six European clubs.

Despite the victory, the country’s first win in three qualifiers, the Choi squad will enter the final three-game stretch in June with many improvements to be made.

After Lee Keun-ho’s 60th-minute goal, Korea lost momentum too quickly, allowing an equalizer by Khalfan Ibrahim three minutes later. That’s a pattern the country has repeated. In a friendly against Zambia in June of last year, Korea allowed a tying goal 12 minutes after scoring first. Korea was also first onto the scoreboard against Australia in a friendly in November, only to lose 2-1.

“After the first goal, the players lost focus, ball ownership and then a goal,” Choi told reporters. “That kind of situation should never happen again.”

The monotonous attack route also needs work - Korea failed all 10 crosses from the sides to the strikers.

“I think it was not a game that properly represents our team colors,” Lee said.

With the victory, Korea briefly surged back to the top of the table in Group A before Uzbekistan reclaimed the lead with a 1-0 home win over Lebanon later in the day. Korea has 10 points from five games, a point behind Uzbekistan, which has played one more game.

Qatar remains in fourth with seven points from six games, trailing Iran on goal difference. The two Middle Eastern teams will face off against each other in their next match in June. Korea will travel to Lebanon in the same month. Two best teams in the group will get an automatic berth at the World Cup in Brazil.