Sun Dong-yul on meeting his mentor in battle

Sun Dong-yul on meeting his mentor in battle 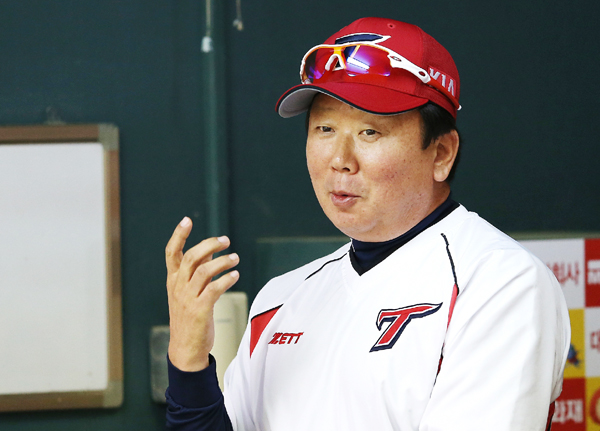 Sun Dong-yul will compete against his mentor Kim Euong-yong for the first time this year.

Sun is the manager of the Kia Tigers, one of the favorites to win the Korea Baseball Organization title.

Kim led the Tigers to the title eight times in the 1980s and the 1990s, six times when Sun was the ace of the Gwangju-based team.

Sun left the team for the Japanese league in 1995 but reunited with Kim in 2004 when Kim was the Samsung Lions manager and Sun was hired as an assistant coach. The next year, both were promoted; Kim to president of the club and Sun to manager.

Kim came back to coaching late last year as the manager of the Hanwha Eagles, the bottom team last season. Sun, who led the Lions to the title twice, left the Daegu team in 2010.

Few deny that they are two of the most talented managers in KBO history. In a recent interview with the Ilgan Sports, Sun said that he respects his mentor, but will have no mercy on the field. Here are some excerpts.

Q. Do you feel any pressure competing against your mentor?

A. When you’re in uniform, it’s a cold, competitive world. I think we have to win whenever we can. I think manager Kim Euong-yong would think the same way.

What kind of stories do you have with him?

A pitcher gets a victory when he pitches six innings. But he used to retire me in the fifth inning with two outs. One out would make me eligible to get a win. For him, the team came ahead of a player’s record. I think he has strongly influenced what I do now.

Could you elaborate on his influence on you as a manager?

When I was an assistant coach at Samsung, I learnt a lot from him. I only remember two or three times when he told me that I did a good job during 10 years under him. He’s tight-lipped when it comes to praising those under him. But he frequently told me that I was replacing pitchers late.

He thinks the quicker you replace pitchers, the better. I think so too.

You said after the regular season last year that you now properly understand your players.

Of course, I’ve completed grasping the players and their styles. I’m advising them to focus on what they do well rather than what they don’t.

How is Kia different from last year?

We have a fixed pool of closers and have a solid defense now. Last year, Kia recorded 18 blown saves. I think it will be a successful year if we just cut that in half, to nine.