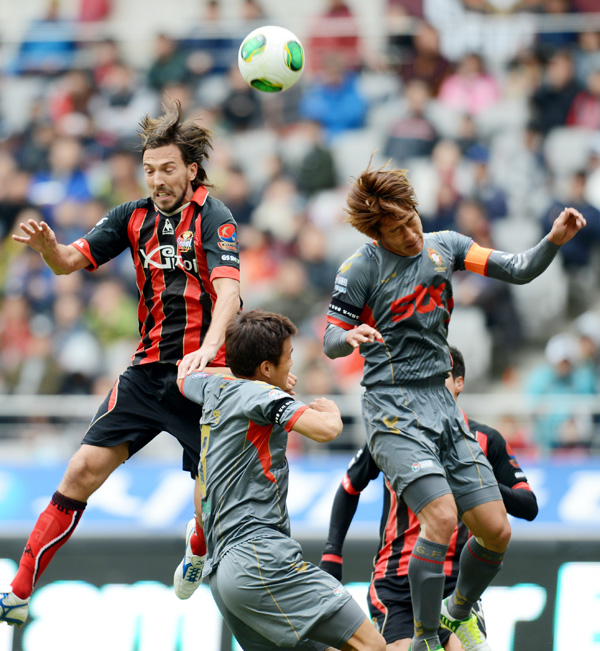 FC Seoul striker Dejan Damjanovic, left, leaps above Gyeongnam FC defenders for a header during a K-League Classic match at Seoul World Cup Stadium on Saturday. Seoul was held to a 2-2 draw. [NEWSIS]

The league-leading Pohang Steelers continued their early strong stretch with a 2-1 victory over the Chunnam Dragons on Saturday as the K-League Classic returned from a two-week international break.

The Suwon Bluewings nudged past the Jeonbuk Motors into third place with a 2-1 victory at Jeonbuk. Reigning champions FC Seoul extended their winless slump to four straight games, being held to a 2-2 draw by Gyeongnam FC on Saturday.

The Ulsan Hyundai routed the weakling Gangwon FC 3-0 yesterday to jump to second place in the league.

At the Steel Yard in Pohang, the visiting Dragons took the lead over the Steelers with a Shim Dong-woon goal in the 29th minute. Hwang Jin-sung leveled for the home team eight minutes into the second half. It took 28 minutes for Lee Myung-joo to score the winner for the Steelers, as the 22-year-old midfielder connected a back pass from Bae Chun-suk into the corner of the net.

It was the second goal of the season for Lee, the 2012 Rookie of the Year.

The undefeated Steelers now have 10 points from four games and are a point clear of Ulsan and the Bluewings. Ulsan leads Suwon on goal difference.

The Suwon Bluewings snapped their 12-game winless streak against the Jeonbuk Motors that dates back to September 2008 at Jeonju World Cup Stadium on Saturday.

Kwak Hee-joo headed in a goal in the 31st minute for the Bluewings’ opener, and Seo Jeong-jin doubled the lead with a lobbed shot off a cross from North Korean national team striker Jong Tae-se in the 57th minute.

In the 82nd minute, Lee Dong-gook, 33 years old, reduced the deficit for the hosts on a penalty shot awarded for a foul against fellow Jeonbuk forward Song Je-heon, extending his own league record of most career goals to 143. But he had to see his club end an undefeated run at three games and settle for fifth place with seven points.

“We have sufficiently prepared for the past two weeks,” Suwon coach Seo Jung-won said.

“I expected that we would have a good result.”

Gyeongnam, without a loss yet, is in seventh place, while Seoul dropped to 11th on two points after bottom-dweller Daejeon Citizen beat Incheon United 2-1 yesterday.

Choi Yong-soo, the 2012 coach of the year, said that his Seoul club needs to improve its backline. Seoul has allowed eight goals in the first four season games. “When there’s a mistake on the frontline, the players need to earn the time to reduce a threat,” Choi said. “I’m sorry that the players could not snap the pace of the attack by our opponents with a technical foul.

“I think the team lost focus over the course of time.”