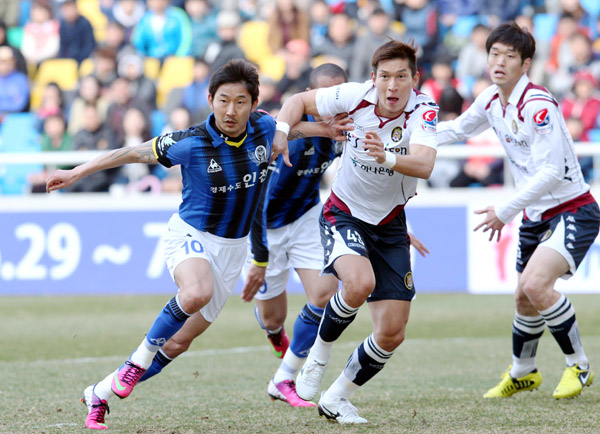 Lee Chun-soo of Incheon United, left, charges ahead of Daejeon Citizen defender Lee Kang-jin to react to a corner kick during a K-League Classic match in Incheon on Sunday. Lee returned to the league for the first time in 1,381 days. [NEWSIS]

World Cup star Lee Chun-soo made an Easter comeback to the K-League after thousands of bows to show penitence for his wayward behavior, but he may have to grind through many more tests to prove that he is a different man.

Lee made his first appearance in three years and nine months in the K-League when his new club, Incheon United, lost 2-1 to the visiting Daejeon Citizen on Sunday. The 31-year-old striker entered the game as a substitute eight minutes into the second half and soon after that, he was seen walking toward the umpire and appealing for a foul. Lee said later that a Citizen defender had slapped him in the back of the head to provoke a player who was known for his fiery temper.

The appeal was rejected, and Lee walked away. There was no brawl with the opposing players or the umpire, a typical scene Lee used to create in the past.

“He deserved being thrown out of the game for the foul, but I chose not to be angry,” Lee told reporters after the game, referring to the player whom he didn’t identify.

“I would not have stood still if I had been the person I was, but now I am a senior player and need to change,” he said. “I think that defenders would want to see how I would respond in many other games in the future as well.”

Such a display of maturity is no surprise for Lee, who wasted his golden years as a football player after he was stripped of a K-League membership in 2009.

A member of the semifinalists of the 2002 World Cup, whose ball-chasing talent was considered even better than Park Ji-sung in their early years, Lee often pursued stardom on his own terms, creating as many opponents as fans in a country stressing conformity and predictability as a virtue.

His reckless behavior, as he later put it, worsened the situation and the Chunnam Dragons requested the Korea Football Association put an indefinite playing ban on him for leaving the club without permission. The former Real Sociedad midfielder was seeking another overseas stint, and he eventually spent three years between 2009 and 2011 in Saudi Arabia and Japan.

But, he wanted to come back to Korea, so last year he launched more than a year-long trip across the country to apologize to those in the local football community and football fans for his behavior. The sanction was finally lifted in February and the 2005 K-League MVP was sent by the Dragons to Incheon, his hometown club. His comeback proved to be an immediate booster for the popularity of Incheon, with more than 10,000 fans visiting Munhak Stadium to watch Sunday’s game.

“Fans shouted my name and my heart went rushing,” Lee said. Incheon was behind 2-1 when he was sent into the game, and Lee failed to score any offensive contribution. Kim Bong-gil, Incheon’s head coach, acknowledged that Lee lacked sharpness.

Lee will have to prove that he still can be a capable player without being a troublemaker.

He said, however, that he won’t change in one aspect.

“Once I entered a stadium, I wanted to win the game with a fighting spirit. That won’t change,” he said. “I think the crowds will like it.”