Samsung set to ring up a record Q1

Samsung set to ring up a record Q1 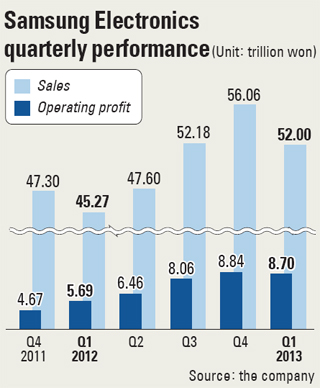 Compared to the same period a year ago, revenue and profit were up 14.9 percent and 52.9 percent, respectively.

Operating profit for the three months ended March 30 takes into account part or all of the damages a U.S. District Court judge awarded to Apple on March 1 in a patent lawsuit against Samsung.

A jury in August ruled Samsung should pay its archrival $1.05 billion, but the judge halved the amount.

During an investor relations session, Samsung said it would set aside funds to pay the amount of damages if they are finalized by the court, but did not disclose exactly from which quarter the money would come from.

Even after deducting funds for the fine, Samsung’s first quarter operating profit turned out to be more than 2 percent higher than analysts’ average estimate of 8.5 trillion won - largely due to the continuing popularity of smartphones, which boast the biggest profit margins of all Samsung products.

The first three months of the year are usually the worst quarter for tech companies. But global consumers kept on buying the flagship Galaxy S3 and phablet Galaxy Note 2 from the world’s top smartphone producer. Analysts estimate that almost 70 percent of Samsung’s operating profit comes from smartphones.

According to Counterpoint Technology Market Research, Samsung shipped 70 million smartphones in the first quarter, more than the 63 million units in the previous quarter, which included the Christmas season.

Compared to the preceding quarter, revenue and profit were down by 7.24 percent and 1.58 percent, respectively. Shares of Samsung Electronics were down 1,000 won, or 0.07 percent, to 1,505,000 won, compared to an overall decline of 1.6 percent for the Kospi.

According to market researcher DRAMeXchange, the fixed prices of the 2 gigabyte DDR3 2, a key DRAM product, have jumped almost 60 percent from $0.81 per unit at the end of December to $1.31 on March 30.

Kang Jeong-won, an analyst with Daishin Securities, said Samsung’s operating profit will exceed 10 trillion won in the second quarter as the next flagship smartphone Galaxy S4 is likely to be released here April 25 and semiconductor sales keep improving.

Semiconductors are as important for long-term sustainability as smartphones, say sources with Samsung, given that smartphone sales are projected to stagnate starting next year.

According to U.S. market researcher Strategic Analytics, the Korean smartphone market is expected to expand 8 percent this year, posting single-digit growth for the first time in five years.