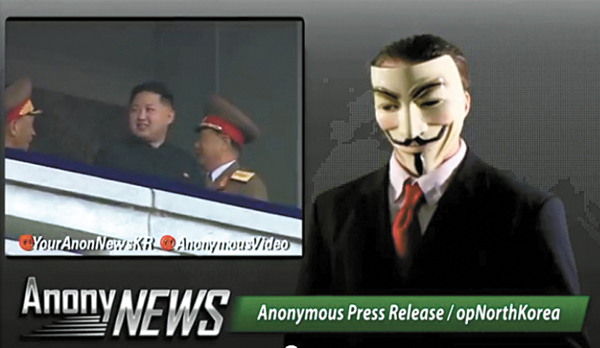 In a video released yesterday on YouTube by Anonymous, a “hacktivist” group, a man wearing a Guy Fawkes mask, a symbol of the group derived from the graphic novel “V For Vendetta,” demands that North Korea stop producing nuclear weapons and Kim Jong-un resign. [Screen capture from YouTube]

An international group of hackers attacked North Korea’s propaganda Web site Wednesday (Korean time) and got access to lists of its registered members, which included thousands of South Koreans.

Anonymous, a so-called “hacktivist” group, said it hacked into the pro-North Web site uriminzokkiri.com in order to tell Pyongyang to stop threatening the world and to warn North Korean leader Kim Jong-un to step down and give his people freedom.

It leaked records of the Web site’s 9,001 members on Thursday including names, user IDs, dates of birth, e-mail addresses and genders. About 5,000 of the e-mail addresses were from South Korea.

Uriminzokkiri.com is based in Shenyang, China, and was established in June 2003 to spread North Korean propaganda. The South Korean government categorized it as unlawful and blocked South Koreans’ access to the site in 2004.

The police, prosecutors and the National Intelligence Service (NIS) are checking whether the South Korean members have violated the country’s National Security Law (NSL).

“Since Anonymous disclosed the names to the public, it would be a dereliction of our duty if we don’t verify whether the information is true,” a spokesman of the NIS told the JoongAng Ilbo. “And that means that we have begun investigations into them.”

If a South Korean exchanged messages with Pyongyang after becoming a member of the Web site, it would be a violation of the NSL’s Article No. 8, which prohibits people from communicating with people in the North and which can be punished with up to 10 years in prison.

Posting words or images that praise North Korea is a violation of Article No. 7 and can be punished with a jail term of up to seven years, according to the NIS.

LG CNS, an IT convergence arm of LG Group, said it checked its 18 e-mail addresses yesterday and found they don’t exist. “We even checked e-mail addresses for retired workers, but none matched with the addresses disclosed on the Internet,” a spokesman of LG CNS said.

“We decided to open this information to the public because North Korea has been continuing carrying out military threats,” Anonymous stated on pastebin.com.

On Tuesday local time, foreign media including CNET reported that Anonymous hacked Uriminzokkiri and other North Korean Web sites and servers and acquired data on about 15,000 accounts. Anonymous pledged to continue its cyberattacks until its demands are met: That North Korea stop producing nuclear weapons and making threats; that Kim Jong-un resign; that a free democracy be established in the North; and that all North Koreans be guaranteed uncensored Internet access.

Anonymous said its first attacks would delete files and paralyze systems but it later would destroy Kim’s dictatorship by hacking servers and networks of the North Korean government.

On Thursday Korean time, Anonymous continued attacking the North’s official Twitter and Flickr page, which now displays a series of tweets with links that poke fun at Kim Jong-un. They posted a wanted poster with an image that combined Kim’s face with that of Jeopalgye, a pig warrior from the Chinese classic “Journey to the West.”

Anonymous said, “We will paralyze all of the North Korean government Web sites on June 25,” through its official Twitter page. The Korean War broke out on June 25, 1950.

“Because the server of the Web site is in China, we can’t do a compulsory investigation or raid the place,” a spokesman of the police said. “We will first check whether the registered members have ever been involved in any type of pro-North activities.”

Conservative civic groups and some netizens are urging the government to punish the members, calling them “secret pro-Pyongyang supporters.”

But when the JoongAng Ilbo contacted 30 of the registered members, most didn’t even know their names were all over the Internet.

“A stranger sent me a Kakao Talk mobile message accusing me of being a member of the Web site,” a 28-year-old teacher surnamed Lee said.

Another 13 people from education and religious circles and labor unions told the JoongAng Ilbo that they have either visited the site or registered with it, but only for studying the North. “On Naver, people can create an account without using their real names, so we can’t say that those people are all South Koreans,” an official of Naver told the JoongAng Ilbo.