Banks aiming to expand base of customers

Banks aiming to expand base of customers 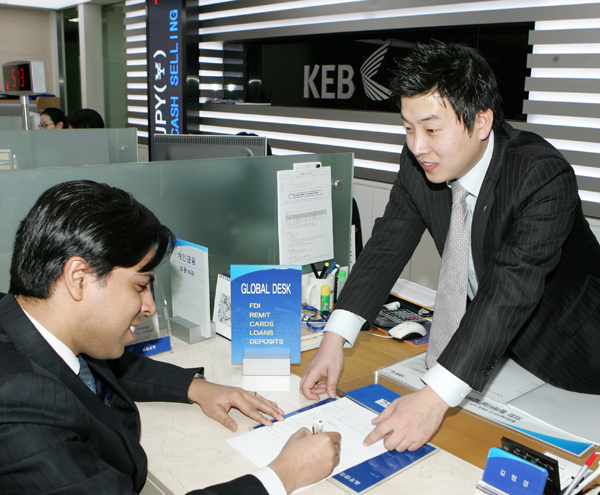 A foreign customer receives financial service consultation from an employee at the Korea Exchange Bank. With the number of foreigners in Korea growing, local banks have been expanding their services targeting expats. Provided by the bank

Neatly dressed in her company uniform, Liu Li-na, one of the nine foreign employees hired by Kyongnam Bank in Changwon, South Gyeongsang, was busy at work on a regular weekday last month. Liu, a 29-year-old Chinese who immigrated to Korea after marrying a Korean man, seemed perfectly adapted to her working environment and prepared to support the bank when offering financial services to migrant workers in the area.

“There are many migrant workers who make visits to the bank to receive overseas remittance services but many of them have a hard time receiving the exact service they want because of the language barrier,” Liu said, with a big smile.

Liu was hired by Kyongnam Bank in 2011 to help the bank’s foreign customers receive adequate financial services from opening bank accounts to transferring money. There are eight more foreign employees from countries such as Vietnam and Uzbekistan. Changwon is an area where many industrial factories are clustered and many migrant workers reside.

With the growing number of foreign residents, tourists and migrant workers flowing into Korea, local banks are introducing a variety of services hoping to widen their customer base. Services were previously offered mainly by the Seoul-based Korea Exchange Bank but now, other commercial banks are also tapping into the market. Industry insiders note that the reason why banks are increasingly expanding their customer base to include foreigners in the country is because the domestic customer base is becoming saturated. Commercial banks have also been spreading out to overseas markets to find a new revenue base.

“We expect the number of foreigners coming into the country to grow year by year,” said an official from the KTO.

Based on figures extracted by Statistics Korea, the number of foreigners officially registered as permanent residents nationwide reached 982,461 in 2011, up 63,544 from the previous year’s 918,917. In 2007, there were 765,429 permanent foreign residents in the country.

“As for migrant workers, they have settled in Korea as members of the regional society,” said Yoo Choong-ryul, an official from Kyongnam Bank. “We plan to introduce more customized services for them.” 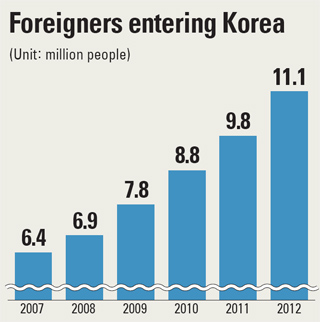 In February, the bank started offering Internet banking services to foreign customers to have them easily and safely transfer money to their home countries. Also, they are offered exemptions on commission fees on money transfers.

Among Seoul-based banks, KEB has been in the lead in offering foreign customer services.

On Monday, KEB introduced its “Easy-One Package,” a comprehensive package of banking services for foreigners to “expand the bank’s foreign customer base and raise the competitiveness of its financial products.” According to KEB, the package includes eight different financial products and services including establishing a bank account, an installment savings account, a fixed deposit account and a global check card.

In November, KEB invited about 40 expat VIP customers from 10 different countries, including the United States, Germany, and France to attend a tour program to the Demilitarized Zone.

“The tour program was put together to provide our expat customers not only financial services but also non-financial services that allow them to experience hands-on activities that help them understand better the Korean culture,” said an official from KEB. “The program itself has been very popular among our foreign customers. We plan to hold the tour program twice every year.”

Standard Chartered Korea has been targeting foreign students living in Korea to expand their expat customer base. Since December, it has been offering a 70 percent discount in its exchange rate to those foreign students who exchange currencies.

Shinhan Bank has also jumped in by offering eight language services for those expats drawing out and sending money from local ATMs. Languages not only include English, Chinese and Japanese but also Vietnamese, Thai and Indonesian. The Industrial Bank of Korea has also hired members of multi-cultural families to help support their services targeting migrant workers in major industrial areas.