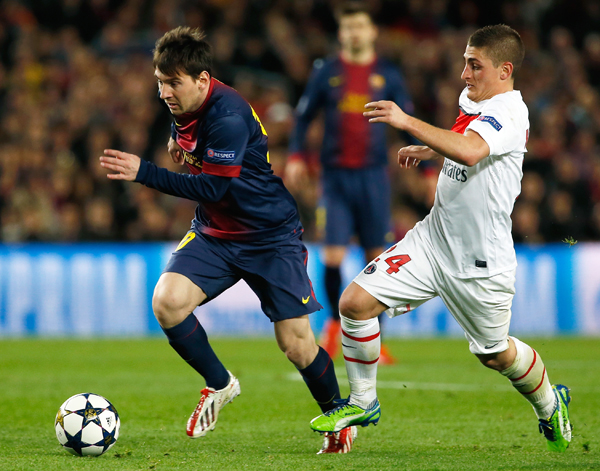 BARCELONA, Spain - Lionel Messi has never been short on late-game heroics, and not even a sore hamstring stopped him from going on as a substitute to help Barcelona rally for a 1-1 draw with Paris Saint-Germain and a place in the Champions League semifinals on Wednesday.

Barcelona advanced on the away goals rule after its 2-2 draw in Paris last week meant the contest finished 3-3 on aggregate, but not without showing just how much it depends on Messi against major opponents.

Messi, who had injured his right leg after scoring in their first match, was only cleared to play an hour before kickoff. He went on in the 62nd minute with his team losing, 1-0, after Javier Pastore’s opener and struggling to find its form.

It took him nine minutes to start the decisive move that Pedro Rodriguez finished off to put Barcelona into a sixth straight semifinal and on course for a fourth Champions League title in eight seasons.

Messi has dominated many a match for Barcelona on its way to trophy success in recent seasons, but his importance and leadership for the Catalan club was rarely more evident than on Wednesday night.

“Messi is a very important player, and he put in a great effort,” Pedro said. “He was the catalyst. We changed after he came on and we have to thank him for that.”

Barcelona was a different team with Messi - despite not being at full strength - compared to the lackluster side that PSG toyed with while the Argentina national watched from the dugout.

Also on Wednesday, Bayern Munich beat Juventus 2-0 to go through 4-0 on aggregate. Real Madrid and Borussia Dortmund are the other semifinalists in Friday’s draw.

Barcelona was almost unrecognizable for stretches in the first half without its star, as it lost its nerve and became sloppy in its trademark passing.

But once the four-time world player of the year went on, Barcelona snapped into action, scored the decisive goal, and bossed the rest of the match.

“Leo is an extraordinary player. We knew that we had the option of playing him if the score wasn’t favorable,” Barcelona assistant coach Jordi Roura said. “Leo knows when to push it and when to put the brakes on. Not being 100 percent, he still has the same attitude and motivation to win.”

PSG’s main threat in the early stages was striker Ezequiel Lavezzi, who forced goalkeeper Victor Valdes into action twice before the quarter-hour mark, while Lucas sailed a long shot over the bar in the 19th.

Barcelona was limited to Andres Iniesta’s incursions and Pedro’s attempt that hit the side-netting from a tight angle.