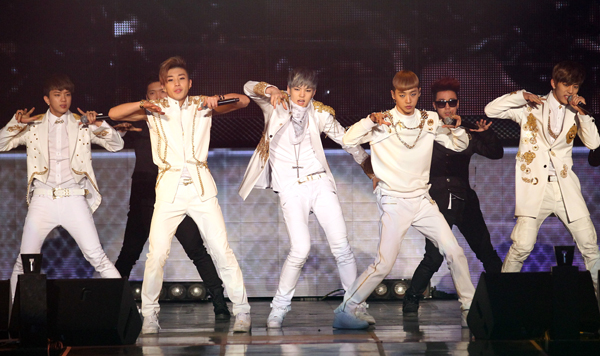 Boy band B.A.P won its 14th Rookie of the Year Award on Saturday in China, setting a record by winning similar awards in five countries, according to its agency, TS Entertainment.

At the Yinyue V Chart Awards, organized by China’s largest music Web site, “Yin Yue Tai,” which about 200 million people visit per month, the group was recognized as a rising rookie, along with Junsu of another boy band JYJ who won the Best Korean Male Artist Award.

The group has won similar rookie awards in Korea, Japan, Germany, France and China in the past year.

“[We] want to become a globally renowned artist,” said Yongguk, leader of the group, at the awards ceremony Saturday at Master Card Center in Beijing.

The group is scheduled to hold its first global tour, “B.A.P Live on Earth,” starting next month. Its concerts in the United States and Japan sold out immediately, so the group added another concert in Japan to meet with more fans.