Ready or not, National Happiness Fund is coming

Ready or not, National Happiness Fund is coming

Potential applicants of the much-touted National Happiness Fund, which would help restructure their debt, receive counseling earlier this month at the Gyeonggi headquarters of the Korea Asset Management Corporation in Suwon, Gyeonggi. [NEWSIS]

When President Park Geun-hye vowed during her campaign last year to create a state-owned fund to write off past-due debts owed by low-income households, many people were skeptical.

Questions were raised about how the government would pay for the National Happiness Fund and how indebted people could be helped without compromising their work ethic or sense of responsibility for their obligations. And from a fundamental perspective, many wondered if it would be right for the government to write off the debts of individuals who had chosen on their own to borrow. Cynics viewed the measure as a political ploy to attract votes.

Leaving questions behind, the Park government officially launched the much-touted National Happiness Fund on March 29 and announced it would begin accepting applications Monday at branches of the Korea Asset Management Corporation. Details, including the size of the fund and its target group, were announced last month, but questions persist about whether the plan is fair, whether it will help lower the country’s growing household debt and whether debtors who receive assistance will be able to subsequently stand on their own.

“Before pushing ahead with the National Happiness Fund, there is a need for the government to delicately draft the plan so that there are no questions raised over fairness,” said Lee Joon-hyup, a research fellow at Hyundai Research Institute. 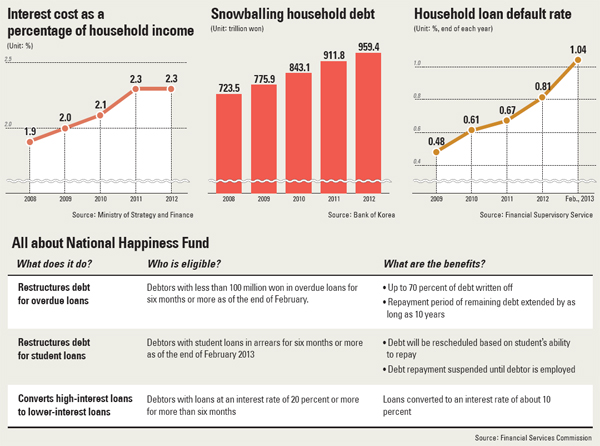 On Monday, officials from the National Happiness Fund, Financial Services Commission (FSC) and the Financial Supervisory Service (FSS) met with officials from NH Nonghyup, KB Kookmin Bank and the Credit Counseling & Recovery Service. They agreed to cooperate in receiving applications for the happiness fund at their branches nationwide. As of late 2012, NH Nonghyup has 1,189 branches, KB Kookmin has 1,188 and the Credit Counseling & Recovery Service has 24.

The agreement came a week before the start of the application period, which will run from Monday through Oct. 31. Applications can also be made at Korea Asset Management Corporation branches and FSS financial support centers.

“The government and the private sector should together realize a new social responsibility model that supports vulnerable social groups,” said Chung Chan-woo, vice chairman of the FSC. “The National Happiness Fund should be carried out according to the plan and be established as a stable system so that this vulnerable group is able to receive support.”

According to the FSC, the aim of the happiness fund is to help heavily indebted low-income households repair their credit by offering them the opportunity to restructure loans from commercial banks. This would allow them to lessen the burden of their principal and interest payments.

Based on the FSC plan, a total of 1.5 trillion won ($1.34 billion) is needed over five years to get the fund rolling. The National Happiness Fund, headed by Bahk Byong-won, chairman of the Korea Federation of Banks, plans to raise about 80 billion won through a fund controlled by Korea Asset Management Corporation. If needed, loans will be taken out and bonds issued. The remaining 70 billion won is expected to be collected from the fund’s proceeds.

The target group for the credit recovery assistance program is those who have borrowed less than 100 million won from financial institutions and been in arrears for more than six months as of the end of February. They will be able to receive government support to write off as much as 70 percent of their debt, depending on their income level. At least 50 percent of their debt will be written off by the fund, with the balance left to the debtors to repay over an extended period of up to 10 years.

The fund’s first move will be to purchase qualifying overdue loans from institutions.

In total, more than 320,000 debtors are expected to benefit from the fund.

“It is important that the government provides the opportunity to debtors in arrears to restore their credit,” said Shin Je-yoon, chairman of the FSC. “Reducing their burdens is important because it is linked to problems related to household debt and slowing of the domestic economy.”

University students struggling to pay back education loans will also benefit from the fund, which will purchase loans from the Korea Student Aid Foundation and financial institutions and then write off student loans that were overdue for six months or longer as of February. The percentage of debt to be paid by the fund will be decided after reviewing the applicant’s ability to repay. Student applicants will also be offered the opportunity to defer paying back their debt until they find a job.

Debtors who have been paying back high-interest loans for more than six months will be offered the opportunity to convert interest rates of 20 percent or more to rates in the 10 percent range.

The total household debt in Korea reached a record 959.4 trillion won last year, up 47.6 trillion won from 911.8 trillion won in 2011, according to the Bank of Korea. Tackling the snowballing household debt has been not only a major task for the Park administration, but also previous governments, amid concerns that runaway debt will hold back the economy. Various indexes have recently shown that private consumption is contracting and facility investment is dropping.

As the happiness fund prepares to get under way, perhaps the biggest question remains: Will writing down a portion of individuals’ debt help slash the size of Korea’s household debt? Lawmakers criticized the 18 trillion won size of the fund proposed during the presidential campaign and transition period and that was cut to 1.5 trillion won. Then lawmakers accused the Park administration of walking away from pledges they said were ambitiously presented to win votes.

“Other elements should follow, such as an improved employment market .?.?. They should all come in one package to overcome the household debt problem, but what’s important is to give at least those swamped by debt the chance to regain their footing.”

Others have raised concerns that the happiness fund could discourage people who have been diligent in repaying their debts from continuing to do so when they see borrowers who are not meeting their obligations bailed out.

Bank officials also note that they have received inquiries from customers that have been regularly paying back their loans asking if their debt will also be written off by the government.

“Customer hopes are high that their debts will be written off by the government someday,” said an official from the bank.

Not all are happy. On Monday, about 10 civic groups, including the People’s Solidarity for Participatory Democracy, held a press conference in Tongui-dong, central Seoul, to criticize the happiness fund plan. They said they will form a monitoring group to make sure the fund benefits the people fairly.

“The target group has been reduced to one-tenth of the initial pledge of 3.22 million people to 320,000 people,” the groups said. “Also, many self-employed and ordinary people are not able to receive government support because it has been restricted to those with less than 100 million won in debt and in arrears for more than six months.”

According to the Hyundai Research Institute, the fund would benefit only a portion of low-income households with debt. Citing data from Statistics Korea, the institute said that of 4.12 million low-income households in 2012 whose disposable income was less than 50 percent of median income, 1.5 million households had overdue loans, including 497,000 with loans that had been in arrears for a year or more.

“Low-income households also include those in risky financial situations but who have been paying back loans even under difficult conditions,” said Lee.