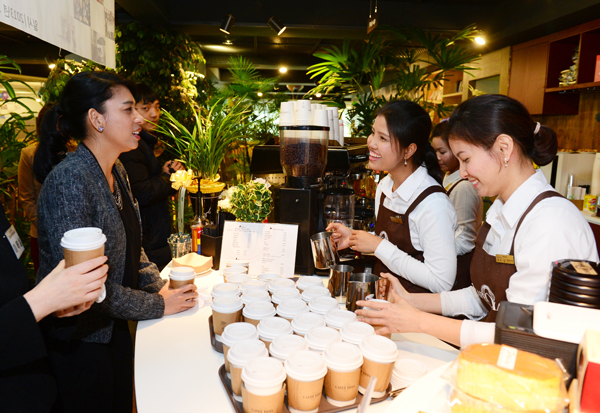 Posco works toward mutual growth with society by creating jobs and pursuing social contribution activities. In 2011, the company began a partnership program with venture companies as part of job creation efforts to provide investment connections for new business ideas.

The program holds a business idea contest, and CEOs of selected companies participate in a training camp where they can exchange feedback, have discussions, receive one-on-one mentoring with professional business consultants and give improved presentations on their business ideas. Finalists then participate in a 10-week intensive business education program before pitching their ideas to Posco and other investors.

Over the last two years, the program found 22 venture companies and offered 7.3 billion won ($6.4 million) in investments along with the Small and Medium Business Corporation and Korea Technology Finance Corporation. With that help, the companies were able to hire 15.2 percent more employees.

The fourth development training camp took place in January with 25 new venture companies, and the finalists will pitch their business ideas at the end of this month.

CEO Chung Joon-yang is co-leader of the Multicultural Families Forum, which sponsors weddings for multicultural couples and finds jobs for female marriage migrants. In a joint effort with the Ministry of Gender Equality and Family, the group also opened a call center to help with their settlement.

This year, the company is supporting a social co-op called CafeOAsia. The coffee shop became the first social co-op to be certified by the Ministry of Employment and Labor earlier this year. It aims to become a sustainable model for other cafes run by social enterprises and hires female marriage migrants. It is located at the Posco Center in Daechi-dong, southern Seoul.

Posco and CES, an educational firm, have researched practical support models for settlement and economic stability of marriage migrants.

While many immigrant women hope to open coffee shops, the team found that independent businesses are usually less popular than franchises and less likely to succeed. So, it decided to launch a social franchise cafe brand.

Graduate students from Kookmin University’s Techno Design School donated the brand name. Three women from Thailand, Vietnam and Cambodia are baristas there and were married in group weddings supported by the Gangnam District Office and Posco. This year, the company will open the cafe’s second branch, which will hire North Korean defectors and people with disabilities.