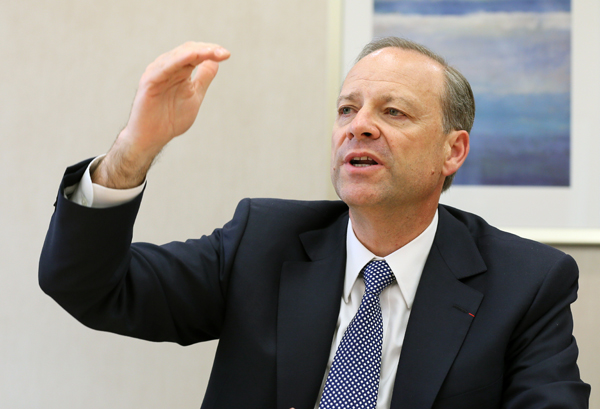 Christopher A. Viehbacher, CEO of Paris-based Sanofi Group, the third-largest pharmaceutical company in the world, said digital technology is going to play an important role in the pharmaceutical industry in the future.

“I think pharmaceutical companies will be much more involved in digital technologies and potentially Korea, because its strength in digital could start to play a role,” Viehbacher said in a recent interview with the Korea JoongAng Daily.

He visited Korea early this month to celebrate a partnership with Korea’s Ministry of Health and Welfare on “open innovation,” a buzzword in the global pharmaceutical market. The German-Canadian said competitiveness comes from innovation and people, and Korea’s smart and hardworking people have great potential to be a part of a competitive pharmaceutical industry.

Q. What is “open innovation?”

A. We do research and development, but we also have changed the culture because the model is changing to the open innovation model. Twenty years ago, we built a big building somewhere in the forest, our scientists worked in isolation, but the problem is that science moves along so fast. There is a need for our researchers to be constantly in contact with the scientific community. You have things to cover such as ecosystems, where you have strong universities, strong hospitals, venture capital, biotech and nonscientific capabilities. Whole brand-new branches and mathematics are being developed. Because of big data, digital technology starts to become extreme and important in health care. So it means that we have to shift the orientation of our research people from an internal to an external focus, and it moves to a collaborative model instead of just working on their own in the lab. That is a big shift because you have to have private and public sectors working together. You have to have big companies and small companies.

Why do you think the Paris-based pharmaceutical company invited you to take over its management, and what is your mission?

I got recruited because the company was facing a strategic crisis. It was going to be losing a major part of sales in generics. And they, the board of directors, needed someone experienced and someone who had a strategic plan, and someone with much more diversifying cases and strategy. I wanted to build a company that wasn’t going to be exposed to another patent-expiring period. That was the real problem that I had seen in our industry. The risk was too high to only invest in research and development. Because you only have 10 years to sell a product, and it takes more than 10 years and more than $2 billion to develop a new product. So the business model saying that I’m going to spend money and have a new product ready when the other product finishes its patent was just too risky.

Science is too unpredictable to be able to do that. So the way I wanted to do it is to construct businesses that have longer lives than patents. Therefore, you need some sort of competitive barrier to entry that’s not a patent. That could be significant capital expenditure or that could be know-how.

In order to be competitive on a global scale, you need innovation. You’re not going to be competitive on a global level just because of low-cost manufacturing. Then I think the question is: Where are the best people going in an industry. When you look at the success of the electronics industry or the car industry, you look at the strength of universities, and you can see that there are plenty of very smart and very hardworking people in Korea.

And, you know, one has to say that today, one of the factors is that pharmaceutical pricing in Korea, for instance, is much lower. So the ability to get rewards from a risky investment is, I think, not there. I think at this stage, if Korea wants to be successful, I think you have to have differentiation. There is no way that you can just go on and produce what everybody else does. Again, cost is not going to be a factor. Indians will always be producing cheaper than you can or we can. So you need to have a commitment to innovation, to creating an ecosystem of research. My understanding is that the government has put a priority on biologics. And I think biologics will be sensible. It’s generally less risky to develop a biologic than a chemical-based group because there are generally less safety issues associated with biologics.

With the development of big data as well as IT, could Korea leverage its IT advantage in terms of pharmaceuticals? Can Korean pharmaceutical companies be as competitive as yours or other leading firms?

I think there is an opportunity in the data. The medical world has traditionally lagged in its use of digital technologies, largely because of its inherent conservative nature. And that conservative nature is only because of concerns regarding patients. You don’t want to do anything to put patients at risk. So, therefore, doing something new has to be fully tested and safe before we are going to be using it. I do think, though, that we are seeing emerging trends in digital technology, and I would say three areas. One is clearly in research, and there are lots of genetic data, and we have lots of health care insurance data, but the genetic data doesn’t tell you much.

What you have to do is be able to associate the genetic data to some physical manifestation of the disease. So, I think there is big data in how you do this research, doing things like crowdsourcing could be a much better use to resolve key scientific problems. So, digital technologies in big data in research could be quite important.

The second key area is in marrying digital technology with therapeutics.

And the third area is providing constant medical education through feedback to physicians.

These are three areas where I think digital can play an significant role in health care. And the interesting thing is that you get electronics companies wanting to come into health care. And they say, well, “We don’t need you because we are in the electronics business,” but there is a big problem with that because they don’t understand the medical care. And so, I’ve talked to the CEO of one communications company wanting to do this. They found that they have to go through regulatory procedures. And they don’t really understand how patients and physicians interact.