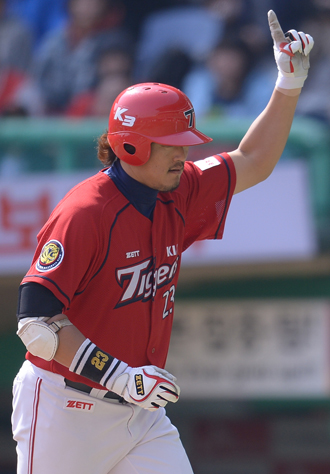 Choi Hee-seop of the Kia Tigers rounds the bases after hitting a solo homer against the SK Wyverns in the fifth inning of Sunday’s game. [NEWSIS]

The game was scoreless until the fifth inning at Incheon Munhak Stadium, when Choi hit a solo homer and Kim Sang-hyun added a two-run shot.

In the seventh, Choi had a two-run homer and the Tigers extended the lead to eight runs, thanks to a solo homer by Park Ki-nam and Lee Beom-ho’s two-run single. Lee added a solo homer in the ninth.

Yang Hyun-jong tossed seven shutout innings for his third victory of the season.

The Tigers have won 11 of their 15 games, getting off to a blistering start toward their 11th Korean Series title.

Lately, they’ve gotten stronger, winning four of their past five games, including a 4-3 victory over the Wyverns on Friday. The Saturday game was rained out.

The Tigers had a four-day break after a 9-0 loss to the Doosan Bears on April 11 and returned resuscitated, winning their first two games against the LG Twins, before losing the third game, 13-12.

“The timing for a break was good,” Tigers manager Sun Dong-yul said after Sunday’s victory. “The batting, in particular, has regained energy.”

Choi, 34, who played for the Chicago Cubs and the Los Angeles Dodgers, has hit five homers in the past four games, trailing only Lee Seong-yeol of the Nexen Heroes, who has six. Choi’s 20 RBI lead the league. The Tigers are third in team batting, hitting .285, and first in team RBI, with 100.

The Tigers will aim to extend their lead when they face the bottom-dwelling NC Dinos for a three-game series in Changwon, beginning tonight.

The Heroes have boosted hopes of earning their first playoff berth with a strong start. They’ve won five straight games through Sunday and are in second place behind the Tigers.

Last year’s KBO MVP, Park Byung-ho, belted a three-run homer and Ben Hacken gave up one run in six innings, while striking out four, as the Heroes blasted the Dinos, 11-2, on Sunday.