Bulls get even with Nets; Clippers edge Grizzlies

Bulls get even with Nets; Clippers edge Grizzlies 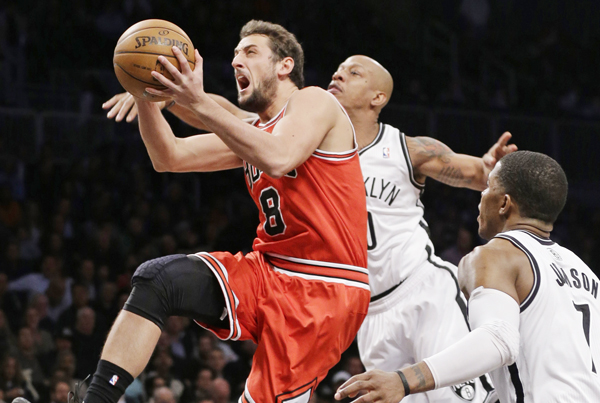 Chicago Bulls guard Marco Belinelli (left) goes up for a layup past Brooklyn Nets ?forward Keith Bogans (center) and guard Joe Johnson (right) in the second half of Game 2 of their first-round NBA playoff series in New York, Monday. [AP/NEWSIS]

NEW YORK - Whatever pain Joakim Noah was feeling in that achy right foot would have to wait.

Blowing a chance to even the Chicago Bulls’ playoff series would have hurt so much worse.

Noah gutted his way through a foot injury that made it difficult to even run in Game 1, making three fourth-quarter baskets as the Bulls beat the Brooklyn Nets, 90-82, on Monday night to tie their first-round series at one game apiece.

“I thought overall, I thought Jo was very rusty in the first game but willed it, and I thought he willed it again tonight and we needed every bit of it,” Bulls coach Tom Thibodeau said. “To me, it’s obvious we’re a much better team with him on the floor.”

Carlos Boozer had 13 points and 12 rebounds, and Luol Deng bounced back from a poor opener with 15 points and 10 boards for the Bulls, who became the first team to win a road game this postseason.

They did it the only way they know how: with bruising Bulls defense.

“I feel like overall our team played passionate basketball tonight and that’s a plus, because it was ugly in that Game 1,” Noah said.

Chicago held the Nets to two baskets in the third quarter to build a big enough lead to hold off a charge in the fourth.

In Los Angeles, Chris Paul’s running jumper against Tony Allen’s defense gave the Clippers a 93-91 victory over the Memphis Grizzlies and a 2-0 lead in their first-round playoff series.

“Tony played as good as defense as you can,” Paul said. “I looked up at the clock and thought I better get a shot off.”

Both teams stayed on the court while the referees reviewed the play. It was declared good, leaving Memphis a tick of the clock to inbound the ball but not enough to get off a final shot.

“It hurts,” said Mike Conley, who scored a playoff-career high 28 points for Memphis. “We wanted to come here and steal one.”

Paul finished with 24 points and nine assists, Blake Griffin added 21 points and eight rebounds and Jamal Crawford scored 15 points on the day he finished second to J.R. Smith of the Knicks for the league’s Sixth Man of the Year award.

“We were on him, the kid made a tough shot,” Memphis coach Lionel Hollins said of Paul. “He’s a great player and he made a big shot.”

Paul carried the Clippers in the final 3:46, scoring eight straight points, including a basket that gave them a 91-89 lead with 1:20 to play.

“The way Conley was blowing by me at the other end, the least I could do was make a couple shots,” Paul said.

Conley led the Grizzlies’ fourth-quarter charge that came up just short. He had 10 points in the period, while Darrell Arthur scored five straight when Randolph was on the bench to pull Memphis into an 89-all tie.

Conley found Marc Gasol alone in the paint and the big man dunked to tie the game 91 with 13 seconds left.

Griffin won a hard-fought jump ball, but Paul missed a 3-pointer. He redeemed himself and set off a raucous reaction - with longtime Clippers fan Billy Crystal pumping both arms in the air - when he drove the right baseline against Allen and banked in the game-winner.