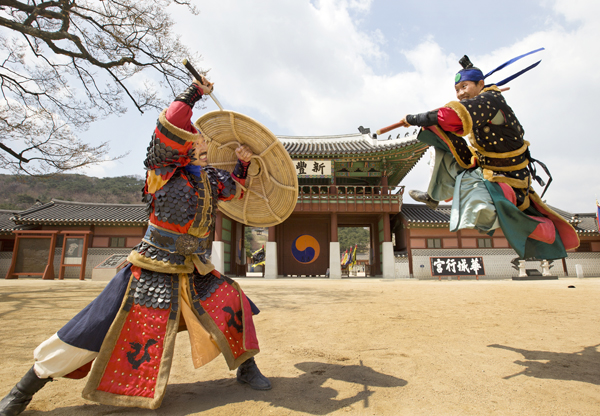 Two fighters use the techniques of Muye24gi in combat. They are armed with deungpae (shields made of rattan) and clubs that embody the spirit of their ancestors. Such demonstrations take place six days a week at Sinpungno, a gate of Hwaseong Fortress in Suwon, Gyeonggi.

In the square in front of Sinpungno, one of the fortress gates, a unit of warriors brandishes glittering swords in a sophisticated and dignified manner. The detachment upholds the principle of Muye24gi, 24 techniques of Korean traditional martial arts. 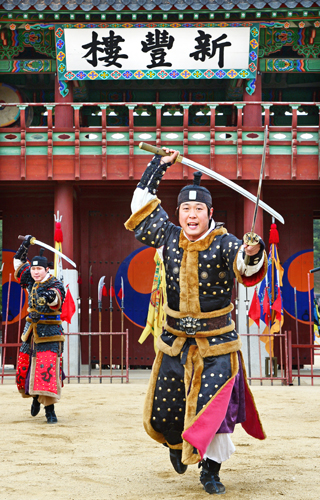 The history of Muye24gi dates back to the reign of King Jeongjo of the Joseon Dynasty. Double swords were mostly used in close-range combat.

The history of Muye24gi dates back to the reign of King Jeongjo of the Joseon Dynasty (1392-1910). King Jeongjo (1752-1800), who was fond of martial arts, was the son of Crown Prince Sado, who was killed by his father. Despite the numerous challenges from those who conspired on the murder, King Jeongjo managed to take the throne in 1776 - but he had to deal with constant death threats from rival fractions. To protect himself as well as the nation from domestic and foreign enemies, he trained troops based on the book “Muyesinbo,” which contains 12 techniques.

He also ordered Gen. Yi Duk-moo to organize Muye24gi, which consists of 18 techniques used on the ground and six on horseback. In 1790, the 24 techniques were compiled into “MuyeDoboTongji,” a comprehensive, illustrated guide.

There are instructions on the handling of weapons like a long bamboo spear, fighting using two swords, standing upside down on a horse and unarmed fighting. 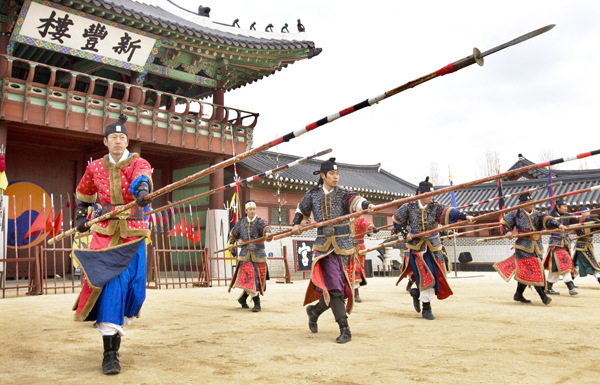 The long spear can be up to 460 centimeters (181 inches) in length. It was used to attack enemies on horseback or in camps in close formation.

King Jeongjo’s elite troops honed their skills at Hwaseong Fortress, built by the king to honor his father.
The martial arts are demonstrated every day except Monday at 11 a.m. by performers at Sinpungno.