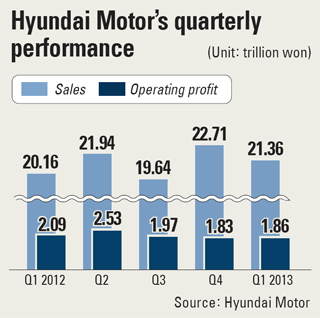 Hyundai Motor’s operating profit in the first quarter plunged more than 10 percent from a year earlier because of the strong won and reduced production in Korea.

Hyundai said in a regulatory filing yesterday that its sales in the January-March period reached 21.3 trillion won ($19.1 billion), a 6 percent increase from a year earlier, but operating profits dropped 10.7 percent on-year to 1.83 trillion won.

“Compared to last year’s period, our first quarter sales increased because we sold more vehicles and our affiliate Hyundai Kefico was included in the consolidated financial accounts,” the automaker said in a release. “A decline in productivity caused by weekend overtime work reduction and increased costs due to the strong won pushed operating profits down.”

But compared with the fourth quarter of 2012, Hyundai saw a bit of improvement as its operating profit was 1.9 percent better, even though sales declined 6 percent.

Hyundai sold a total of 1.17 million vehicles worldwide in this first quarter, up 9.2 percent from last year. Sales overseas led the growth with a 10.9 percent on-year increase to 1.01 million vehicles, but at home, the company saw a 0.7 percent decline to 153,000 units following a production decline.

Hyundai said an ongoing weekend overtime work dispute is one of the main causes of reduced profitability.

“Despite our effort to integrate and sharing platforms of our vehicle, our sales cost ratio has increased one percent from a year ago to hit 78 percent because of reduced productivity in our local plants,” the company said.

Hyundai’s workers in Ulsan, Asan and Jeonju have not been doing weekend overtime work for the last seven weeks after demanding more pay. As of last weekend, Hyundai said 48,000 vehicles weren’t manufactured on schedule, and the cost is as much as 950 billion won.

To solve the problem, the company is reportedly trying to bring back former vice chairman Yoon Yeo-chul. Yoon, who resigned last year, pulled off a strike-free business period from 2009 to 2011 when he was in charge of labor issues.

Further describing the decline in operating profits, Hyundai said its marketing expenses decreased but its liabilities for estimated future warranties increased 11.3 percent on-year to 2.8 trillion won because of the strong won. As a result, its total operating cost-to-sales ratio jumped 0.7 percent from a year earlier, hitting 13.3 percent, the automaker said.

“For this first quarter, Hyundai started with disadvantages like the end of consumption tax cuts, a fluctuating currency and reduced production, so the results aren’t far from expectation,” said Chang Moon-su, a researcher at Eugene Investment & Securities. “But in the second quarter, Hyundai is expected to have positive results as auto demand will grow in foreign countries.”

Hyundai, led by Chairman Chung Mong-koo, said that although the global auto market is recovering slower than expected, it will make its best effort to spur growth by improving quality.

“Although there are worries about price competitiveness due to the weak yen, we expect sales in the U.S. will recover,” Hyundai’s vice president and Chief Financial Officer Lee Won-hee said in a conference call yesterday. “Since plants in China and Brazil are fully operating, we expect sales from emerging markets to also go up.”