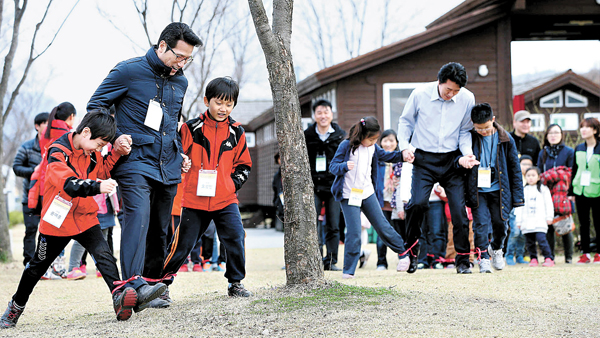 Lawmaker Chung Byung-guk, left, of the Saenuri Party participates in a team race last weekend at an education program designed to strengthen character-building among young people. By Park Jong-keun

GAPYEONG, GYEONGGI - Having long been judged mainly by scores of multiple-choice tests that require intense cramming, Korean students are placed under great pressure, studying the longest hours among Organization for Economic Cooperation and Development (OECD) countries.

However, concerns have been growing about rote learning and teaching, and more and more people have acknowledged the importance of character education.

Twenty companies, including KT and the JoongAng Ilbo, held an education camp designed to help students cultivate themselves as moral, mannered and socially adjusted people through a wide range of education and experience programs.

A total of 60 students and parents participated in Humart Character Camp at Jarasum in Gapyeong, Gyeonggi, last weekend. Humart is a combination of “humanity” and “smart.”

The camp featured cooking, calligraphy and music performances, among other programs, and was also attended by lawmakers. Four young people were bustling with activity, preparing a roast chicken.

“I think you need to press the chicken to cut it well,” said a 14-year-old boy, advising a struggling 11-year-old on handling chicken.

“It looks a little dangerous, so let me do it,” he said. 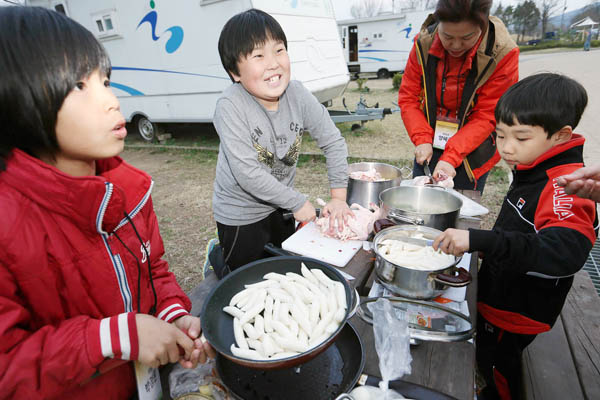 All of them were still not accustomed to cooking methods, but they appeared to try their best to prepare the dish.

“I was going back and forth about participating because my son’s midterm starts Monday,” said Uhm Seong-eun, 43. “But when I watched my son cooperate with others, I thought it was a great decision to be here. He’s learning how to work with others, which I think is more important than the test.”

In the calligraphy session, professional calligrapher Kim Sung-tae showed the students and parents how to write with a brush.

Most participants said it was their first time doing calligraphy, but they practiced earnestly.

At the end of the camp, free time was given to encourage the children and parents to interact with each other.

Musicians Shin Nal-sae and Jung Jin-hee presented their performances during the session.

“So far, I’ve been a bit selfish, thinking that only my son and daughter matter,” said Yang Seung-in, 41, who came with her children from Busan. “But now I think it is important for all young people to have social and emotional leanings to build good character.”

Yang Hye-jung, 41, also echoed Shin’s thought. “I want the schools to launch some courses on character education. I hope the policy mandates it,” she said.

In response, lawmakers promised to push for an education system where character building is valued.

“There are about 40 lawmakers from both the ruling and opposition parties to draft a bill aimed at requiring the schools to have character education by next February,” said Chung Ui-hwa, a five-term lawmaker of the ruling Saenuri Party who belongs to a group at the National Assembly advocating character education.

Other legislators also acknowledged the need for moral education.

“Students first need to learn how to live in harmony with the community before taking lessons in math and English,” said Shin Hak-yong, a member of the National Assembly from the Democratic United Party.

While supporting character education, some participants were skeptical about feasibility of a legislative mandate.