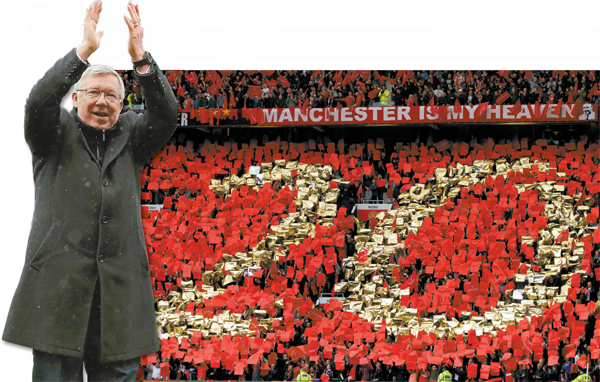 Park Ji-sung’s seven-year stint with Manchester United was such a success that any move was likely to be a step downward. And with Queens Park Rangers, the descent seems to have come too quickly.

The already-relegated west London club lost its season final home match against New Castle 2-1 on Sunday. With a meager 25 points from 37 games, QPR trails 19th-place Reading by three points with only a match at Liverpool left for Sunday. Once again, Park had to watch his club’s loss from the bench, a demoralizing place for a player with nine Premier League titles, a European title and a World title.

Highlighting the eclipsing era of Park is the retirement of Sir Alex Ferguson, who trained the Korean midfielder into a world-class football player.

Ferguson announced last week that he would end a 27-year-long career with Manchester United, and the club, which has already confirmed its 20th league title, bid a fitting farewell to the 71-year-old Scot with a 2-1 win over Swansea City in its final home match of the season.

His departure is a loss for many Red Devils fans who cherish the lord’s long reign over a “United kingdom” but also a blow to Park, who found inspiration and consolation from his old coach even after he left Manchester in July. If it were Guus Hiddink that discovered Park’s talent, it was Ferguson that completed it.

The relationship between Park and Ferguson started in May 2005 when Park’s PSV Eindhoven was playing a David-Goliath battle against AC Milan in the semifinals of the Champions League. Park’s superb 9th minute goal in the Dutch team’s 3-1 second-leg victory against AC Milan was so impressive to Ferguson, who was watching the game in the stands, that he called Park with an offer. Park accepted despite the opposition from Hiddink, who coached Park at Eindhoven since 2002.

Park’s ascent with the world’s most expensive club was slow. In the beginning, he was ridiculed as a jersey seller for Asian fans by many Manchester media outlets and fans. But Ferguson did not budge and kept confidence in Park, saying that he would lead the team’s future.

Ferguson helped that happen with efficient employment of the industrious, selfless player.

In what Korean media dubbed a “Park Ji-sung shift,” Ferguson allowed Park to switch positions beyond his usual midfield turf. Given the chance, Park created many goal chances, usually for others.

Such tactics proved successful, for instance, in a Champions League match against AC Milan in 2011, where he kept AC Milan key player Andrea Pirlo in check.

Park’s value grew as much as his contributions to the team. Since his Premier League debut on Aug. 11, 2005, Park played in 205 games as of last year. He was the 200th person in the 134-year history of the club to play 200 games or more and the only Asian member of Manchester’s 200-game club. 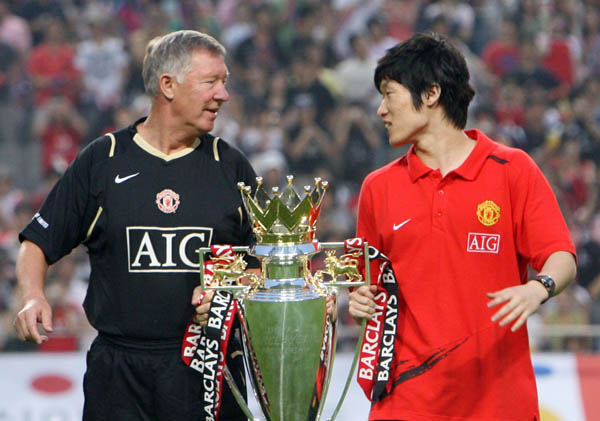 Manchester United manager Alex Ferguson and his pupil Park Ji-sung, with the 2006-7 Premier League trophy in their hands, walk around Seoul World Cup Stadium in Sangam-dong, on July 20, 2007, before a friendly between Manchester United and FC Seoul. [JoongAng Ilbo]

The two were not always on good terms. Ferguson excluded Park from the starting lineup in the 2007-8 Champions League final despite Park’s noticeable contributions en route to the final. Ferguson later said that benching Park was one of the most difficult decisions in his career as a manager, but it was unacceptable to many Korean fans - and probably Park himself.

Manchester won the final against Chelsea in a penalty shootout. Later, Park played in two other Champions League finals, but Barcelona foiled his bid to earn another trophy on both attempts.

Ferguson’s dependence on Park markedly diminished in the 2011-12 season and Park finally decided to open a new chapter in his football career with QPR. Korean media dissected Ferguson’s words for any hint of a change in his attitude toward Park, but Ferguson survived the scrutiny with his displays of affection.

When Park joined QPR, Ferguson wrote on Manchester’s Web site that he was sorry he could not give Park as much opportunity as he wanted.

Ferguson also sent a letter to Park, which his father Park Sung-jong disclosed to the public last November. In the letter, Ferguson said that Park’s departure was a great disappointment for Manchester fans.

Korean papers also noticed Ferguson’s handshake with Park before a league match between Manchester and QPR at Loftus Road on Feb. 23. Ferguson went to the QPR bench and offered a handshake to Park, which was humbly accepted with a smile.

Maybe Ferguson knew how not to offend Koreans. Or he might simply be a gentleman.

How they really feel about each other will be revealed in memoirs down the road. But, there are few doubts that Ferguson would take up a big chapter in a Park retrospective.

Now the great mentor is ending his football life, and Park will have to try harder to turn his own career around.