Suncheon spares trees from the ax

Suncheon spares trees from the ax 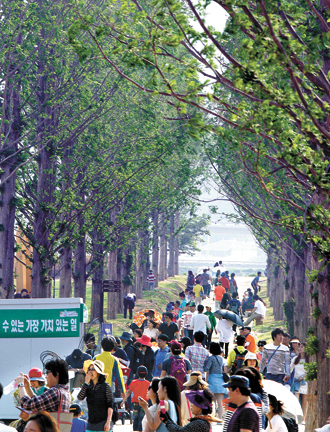 These metasequoia trees at the Suncheon Bay Garden Expo were initially planted alongside the 88 Olympic Expressway, but were brought to the festival when they had to be removed to expand the highway. By Oh Jong-chan

SUNCHEON, South Jeolla ? When visitors to the Suncheon Bay Garden Expo stroll along a road lined with towering, deciduous metasequoia (dawn redwood) trees leading into a Spanish-themed garden, they would never imagine that the lush trees were nearly cut down and discarded.

The 80 or so trees were initially planted more than 20 years ago alongside the 88 Olympic Expressway, which connects Namwon, North Jeolla, and Hamyang, South Gyeongsang.

But they were at risk of being cut down when the freeway began construction for expansion two years ago.

An official from the Suncheon District Office was tipped off about the construction and finally secured the trees, planting them as part of the garden exhibition which, so far, has attracted 920,000 visitors three weeks after its opening.

Along with the metasequoia, a broad range of plants including royal azalea and weigela have been “reused” for Suncheon’s festival that will run through Oct. 20.

The trees coming from the expressway account for 55.3 percent of the entire shrubs at the event and saved Suncheon city some 10 billion won ($9 million) in costs.

The botanical species are not the sole contributors to cutting costs. The 25,000 tons of rocks brought from different construction sites play their part in decorating the exotic gardens on display.

Most of them come from a new expressway connecting South Jeolla’s Mokpo and Gwangyang. The use of rocks on building sites saved 2.5 billion won, according to the committee organizing the garden exhibit.

“The stones and trees once used in other places might not be as beautiful as those produced for landscaping,” said Choi Deok-rim, director of the organizing committee.

“We didn’t want to waste tax money to provide something breathtaking for only six months. And the reused stuff also preserves its own beauty,” the director said.

Some providers of specialty trees, however, are said to have been disappointed by the local government’s frugality.

Measuring 1.2 meters (3.9 feet) in height and 180 meters in length, a huge screen fence that surrounds the venue is made of a renewable source: reed. The bay area of the city boasts an extensive reed bed, but the reed is cut every spring.

They came up with an idea to make use of it to create a massive fence. The reed fence can later be used for fertilizer.

A number of basic products required for the festival - ranging from chairs, rain coats and clothes for voluntary workers - saved Suncheon 1.6 billion won.

“We spent about 51.8 billion won forming the gardens for the festival,” said Na Seung-byung, an executive of the organizing committee.

“If we didn’t reuse trees, rocks and other stuff like chairs, it would cost us another 20 billion won in total,” Na said.