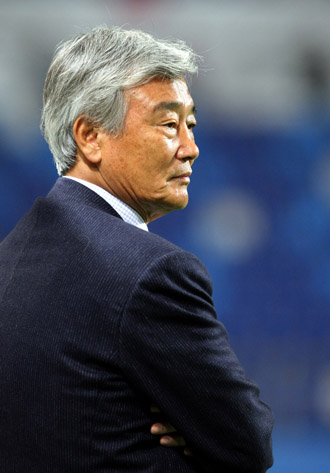 Korea will never be able to produce as great a football coach as Sir Alex Ferguson of Manchester United until the country’s professional clubs stop treating their coaches as “temporary workers,” according to a well-known former K-League coach.

In an interview with Ilgan Sports, the former Suwon Bluewings head coach was envious of Ferguson, who received a rousing send-off by his home fans on Sunday after announcing his retirement.

Kim said that Ferguson’s achievements as a football manager, including 38 trophies in a 27-year stint with Manchester United, was partly a result of respect for coaches by English football.

Kim himself has built a successful career as a coach; he led Suwon to 13 trophies between 1996 and 2003. He is the second-longest tenured coach in the K-League after Kim Jung-nam, the former Ulsan Hyundai coach, who served for eight years, four months and nine days.

Kim Ho said for now, that is as far as a successful Korean coach can get.

“In Korea, clubs regard the managers as expendables,” Kim said. “Without respect for them, there won’t be a Ferguson out of Korea.”

Many K-League coaches agree that a coach should be guaranteed at least three years at the helm to be able to produce a good outcome. In the league, however, coaches are sacked after 25 months in the seat on average.

K-League coaches serve at the helm an average of 767 days, or less than 26 months. According to the league database, there have been 144 contracts for head coaching positions in its 30-year history and 60 of them, about 41 percent, were revoked within a year. Eighty-five of them were terminated within two years. Only 31 of the contracts remained effective for three years or longer.

“The coaches of the leading clubs of the K-League these days are younger than their predecessors used to be when they were taking their positions,” Kim said. “It is because the clubs want to use people who are inexperienced, and obedient to them.”

During and after the 2012 K-League season, 10 of the 16 first-division teams changed head coaches. One of the new coaches, Dang Sung-jeung, of Daegu FC, was sacked last month after managing only eight games.

“It’s not another person’s affair,” the coach of a K-League club told the Ilgan Sports on condition of anonymity. “Coach Dang must have had his own philosophy, but he had to quit before putting it into practice.

“Who knows that I would follow his suit and be sent away soon.”