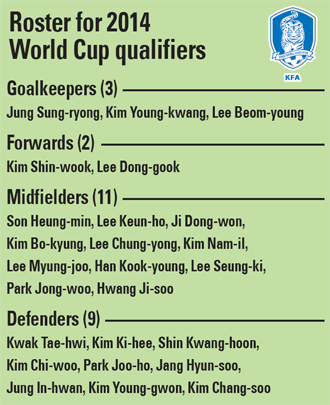 Son Heung-min of Hamburg SV was also called up, while Park Chu-young of Celta Vigo was left off the team for the second time in a row.

National football team coach Choi Kang-hee yesterday announced the 25-member roster for the three qualifiers, including an away match against Lebanon on June 4.

Kim, a member of the semifinalist 2002 FIFA World Cup team, has joined the national team for the first time since the 2010 South Africa World Cup. He also played during the 2006 World Cup in Germany. At 36, he has rejuvenated his form this year, contributing to a surge by the Incheon United, which is trailing the K-League Classic leader Pohang Steelers by six points. Kim is leading his club in passes, with 507 and interceptions, with 52.

Kim is three games shy of joining the A-match century club in Korea, a seven-member group whose members include Park Ji-sung of Queens Park Rangers. Kim has played 97 A-matches, one more than Lee Dong-gook, a Jeonbuk Motors striker. Lee was also called up this time.

Son, who scored 12 Bundesliga goals this season, ended his goal drought in a Taegeuk uniform in the previous qualifier against Qatar on March 26, with his last-minute game-winner in Korea’s 2-1 victory at the World Cup Stadium in Seoul.

Kim Bo-kyung of Cardiff City also was renamed to Choi’s squad after being overlooked against Qatar. Kim, 23, scored two goals and an assist for Cardiff this season, helping its promotion to the Premier League.

Lee Myung-joo, who scored four goals in the Steelers’ breakthrough run in the K-League Classic, was also called up into the midfield position.

Yun Suk-young of Queens Park Rangers was excluded from Choi’s bid to retool the wing back, which revealed a big hole in the recent matches. Park Won-jae of Jeonbuk Motors and Oh Beom-seok of Korean Police FC were also removed as wing backs as Kim Chang-soo of Kashiwa Reysol, Park Joo-ho of FC Basel and Kim Chi-woo of FC Seoul were called to fill their spots.

The Lebanon match is a must-win game for Korea, whose last two games are against the strongest opponents in the group, Uzbekistan on June 11 and Iran on June 18. Korea has 10 points from five games, a point behind Uzbekistan, which has played one more game.

The two top teams from Group A will automatically get a World Cup berth. The third team will have a playoff in September with the third-place team from Group B. The winner will then enter the international playoffs in November, where it will have to vie with a Latin American team for a spot at the World Cup.