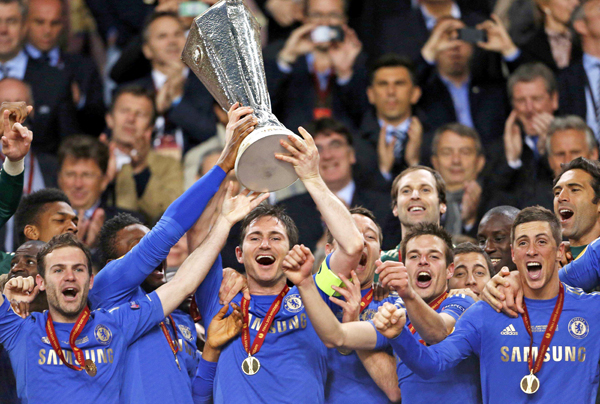 Chelsea’s players celebrate with the trophy after defeating Benfica in their Europa League final match at the Amsterdam Arena, Wednesday. [REUTERS/NEWSIS]

AMSTERDAM - Branislav Ivanovic made up for the heartbreak of missing last year’s Champions League triumph by heading a dramatic stoppage-time goal to lead Chelsea to a 2-1 win over Benfica in the Europa League final on Wednesday.

The Serbian defender, sidelined for the final against Bayern Munich 12 months ago through suspension, climbed high at the far post to meet Juan Mata’s corner with a looping header that arched over keeper Artur and into the back of the net.

The goal sent the London club’s blue-decked fans into rapture and meant Chelsea became the first English club to win all three of UEFA’s major trophies.

Ajax Amsterdam, Bayern Munich and Juventus are the only other teams to have won the Europa League, European Cup and the defunct Cup Winners’ Cup.

Fernando Torres had put Chelsea in front with a well-taken solo goal in the 59th minute before Oscar Cardozo replied for Benfica from the penalty spot nine minutes later after Cesar Azpilicueta handled in the box.

“This is a great feeling,” Ivanovic told ITV Sport after the Stamford Bridge club won the 68th fixture of a marathon season.

“The team deserved this because we have had a very difficult season and a lot of games. We deserve that trophy.”

The victory also allowed interim manager Rafa Benitez, who took over from Roberto Di Matteo when the Champions League-winning Italian was sacked in November, to pick up his first piece of silverware at the London club. The Spaniard will leave at the end of the campaign, with media reports suggesting Jose Mourinho is quitting Real Madrid to return for a second stint in charge at Chelsea.

Benfica, smarting from Saturday’s 2-1 defeat by Porto in their domestic title showdown, started the game the brighter and Paraguayan sharpshooter Oscar Cardozo headed over from close range in the second minute.

The Portuguese side, desperate to end a run of six straight defeats in European finals, also went close 12 minutes later when Chelsea had to hack the ball to safety following a goalmouth scramble.

Chelsea, for their part, had to again rely on the battling qualities that stood them in good stead in last year’s victorious Champions League campaign.

Frank Lampard, captain in the absence of John Terry who agonizingly missed out on a European final for the second year in a row after being injured in Premier League action over the weekend, then went close to putting his team in front.

The England midfielder, who became Chelsea’s all-time leading scorer last weekend with his double against Aston Villa taking his tally to 203, took aim from 25 meters (29.5 feet) out and his venomous, swerving effort was tipped over the bar by Artur.