No one to answer the phone

No one to answer the phone 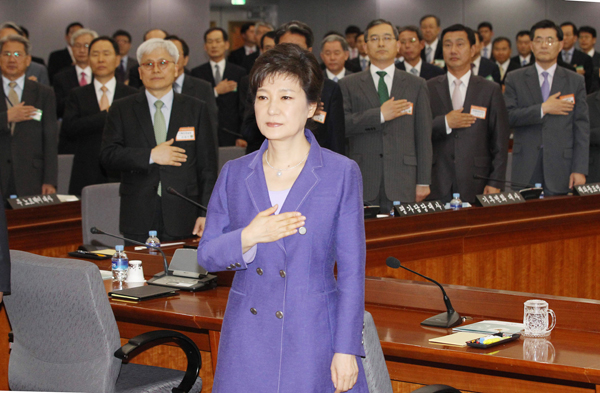 colI often get interesting calls from diplomats and foreign journalists stationed in Seoul. They all say they are unsure where and whom to call about affairs. The same dialogue also pops up during events and meetings I attend these days. In the past they would debate policies and the state of affairs, but now they all wonder whom to address for questions and answers.

This phenomenon has to do with mixed signs and lack of clarity in policies of the Park Geun-hye administration. For example, the unification minister proposes dialogue with North Korea one day and the presidential office denies it the next day. The president makes a different remark and the prime minister another. The cacophony has finally been muted through the president’s solo remarks.

This is hardly what the president promised - a more responsible prime minister and ministers in her government - on the campaign trail and at the beginning of her term. The recent embarrassing sexual scandal involving former presidential spokesman Yoon Chang-jung and his unsavory behavior during the president’s first official visit to Washington underscored the government’s poor house management.

“Who do I call if I want to call Europe?” was famously uttered by Henry Kissinger, top U.S. diplomat under presidents Richard Nixon and Gerald Ford, to describe the lack of a single foreign policy under a continent made of nations with divergent interests during the 1970s. “Now we have a kind of telephone number, it isn’t really absolutely clear if it is the voice America wants to deal with .?.?. I would say that even if a telephone exists and if they answered it, the answer is not always very clear,” he said. People get the same bewilderment from the incumbent government.

A lack of clarity and consistency often happens in the early stage of a fledgling government. But the symptoms seem to be serious for the Park Geun-hye government. In past governments, the fact that there were too many other unofficial powers people had to call and report to separately from the legitimate government officials caused problems. But under the current government, people simply do not know where and whom to call.

It may be because Park had been over-scrupulous about keeping her boundaries clear after all the controversies and noise the family members, alumni and church acquaintances of her predecessor Lee Myung-bak caused.

Instead, Park emphasized responsible governance. But so far we have seen little of it. It looks like the president is running the government on her own. The decision-making entirely lies in the eyes and mouth of the president. Naturally there is no bridge between the president and the public. The people don’t know who to call and so will call up the president for everything. The president cannot pick up the phone nor answer every call.

There is no other way but to protest. We see advertisements addressing the president in newspapers. Downtown protests are likely to follow suit.

The main opposition Democratic Party’s Representative Yoo In-tae pointed out that there is not a single politician who can draw sufficient public support to challenge the president today. Since the direct presidential election was introduced in the late 1980s, the so-called three Kims - Kim Young-sam, Kim Dae-jung and Kim Jong-pil - all played crucial roles in keeping one another and other presidents in check.

Park Geun-hye as a rival politician from the same conservative party directly raised her voice against former President Lee Myung-bak. But there is no one from the political stage for the role. The bureaucratic society, political party, legislative and civilian community would grow inactive and lethargic.

The president may argue “what’s wrong with using the best of the power and authority to serve the people?” Even with good intentions, power concentrated on a single president is dangerous. It is an irrefutable political truth in any civilization.

Key national decisions and appropriation of power among political powers lay in the hands of the president alone today. There is no one in the middle. The president would be tempted to address the people directly and the people vice versa.

But it is not a healthy organization if the leader and individuals settle matters among themselves. We need to have more people between the president and the populace to receive calls and give answers.

* The author is a professor of political science at Seoul National University.