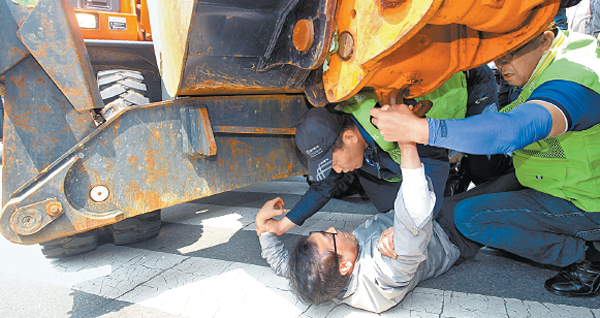 A worker from LH Corporation slides under heavy construction equipment in a protest against officials from Seongnam City Government who attempted to remove installations in the LH headquarters, which the city government calls illegal. [NEWSIS]

A dispute between the Seongnam City Government and the Korea Land Housing Corporation (LH) continued on Thursday as the city government dispatched around 80 government workers to conduct a special inspection into the LH headquarters office in Seongnam, Gyeonggi, an unusual move for a local government office to send such government workers on a large scale inspection to a state-run institute.

The 80-some inspectors were blocked by 300-some LH employees, both male and female workers all dressed in gray company jackets, standing in the entranceway.

Workers locked arms and stood in front of the government workers, who withdrew from the scene at around 12 p.m. Thursday.

The Seongnam government’s action is viewed as a retaliatory action against the corporation’s housing distribution plan announced Tuesday.

The confrontation stems from the announcement by the LH Corporation to lease one of the two apartment complexes in Bakhyun New Town in Seongnam to the general public. The complex, designated to be leased by LH, has 1,869 apartment homes.

The announcement is a departure from the original plan supported by the city government that the two complexes with 3,593 apartment homes are for the Seongnam residents of three neighborhoods who will be evicted for an urban redevelopment plan. The three neighborhoods are Geumgwang-1, Sinheung-2 and Jung-1.

In anticipation of the housing demands of the soon-to-be evicted, LH completed the apartment complex construction in Seongnam’s Bakhyun New Town in 2009.

But with ripple effects still felt from the 2008 global financial crisis and a prolonged real estate slump, the LH Corporation delayed the development project with no timetable for resumption.

The 3,593 apartments have been totally empty for four years, with the LH Corporation spending 15 billion won ($13.3 million) in total since they were built to maintain the empty complex.

Not knowing when the empty apartments will be occupied, the land developer on Tuesday made an announcement on the occupant recruitment, which immediately drew an outcry from the city authorities.

The city government claims the state-run developer should first receive consent from people living in the now-delayed development zone who applied to move into the apartments before making a change in the housing plan.

“A total of 3,607 households from the three neighborhoods designated for the development project applied to the LH to move into the Bakhyun town complex,” Sohn Ju-yong, an official at the urban development team at the city government told the Korea JoongAng Daily.

“LH must receive consent from those households before requesting the city government accept its changed housing proposal.”

The official also noted the city government had proposed to the developer that it would finance the now-stalled development project with 132 billion won with no interest.

With the proposal the two held talks, Sohn said. “Then the LH suddenly withdrew from the talks and announced its occupant recruitment plan [Tuesday].”

The Seongnam office stated it will keep sending its officials to the land developer’s headquarters well into the next month, saying the corporation is interfering with the public duty.